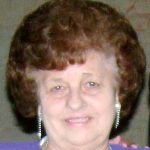 Doris loved her husband, Dorman, very much and they were married for 60 years.  She was a wonderful wife, mother and mawmaw. She was a member of Central Assembly of God in Haughton, LA.  She loved going to her Sunday school class, reading, shopping, cooking, spending time with family and her two yorkies Sassy and Sasha.

Services were held at 1:00 pm on Sunday, July 20th at Walnut Hill UPC in Leesville, LA.

Doris will be missed by her family and friends.