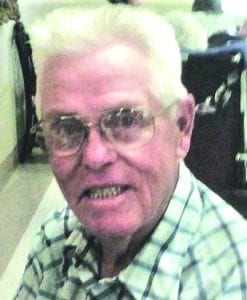 Ivan, LA – Freddie Hugh Hagan, Sr. “Fred”, age 81, of Ivan, LA passed away Wednesday, June 7, 2017 after a fearless battle with cancer. A celebration of Fred’s life will be held at 11:00 am, Saturday, June 10, 2017 at Pilgrim Home Baptist Church in Ivan, LA, where he was a faithful member, with Rev. Scotty Guillot and Rev. Wade Allen officiating. Interment will follow at Pilgrim Home Cemetery under the direction of Bailey Funeral Home, Springhill, LA.

Visitation will be held from 5:30 to 7:00 pm Friday at Bailey Funeral Home, Springhill, LA.
Preceding Fred in death were his parents, Alex and Minnie Hagan as well as his brother, Gerald Lee.

Fred is survived by his beloved Lena Mae, wife of almost 60 years (really about 76 years since they were married in the first grade as Mr. and Mrs. Tom Thumb in the class play!).

Fred owned and operated Hagan Logging and worked in the logging and forestry industry for many years. After his retirement from “the woods”, he worked as a special deputy with the Sheriff’s Posse in Bossier Parish.

In Fred’s younger years, he enjoyed hunting, fishing, playing pool and dominoes, arm wrestling and finishing a good fight! He was a man of few words and particularly liked the fact that he could put the fear of God in anyone with just one look. As the years rolled by, he became an avid golfer with a gentle soul with an unforgettable presence and personality, and as long as he had Lena Mae to love, he was happy.

A special thank you to all of our family and friends as well as Dr. Jeremy Norwood, Dr. Steve Taylor, Dr. John Brady, Dr. Patrick Deere and Ark-La-Tex Home Health Care for all the years of care and support.

And finally, a special thanks to the staff at Vivian Health Care Center, especially to his granddaughter, Savannah, for their undivided attention to Fred’s care and rehabilitation during the last few months.

In lieu of flowers, memorials may be made to St. Jude Children’s Research Hospital.
Sign our online guest book at www.baileyfuneralhome.net