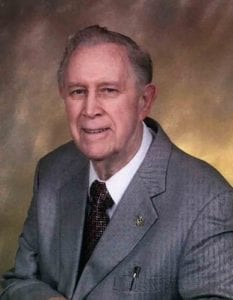 Graveside service will be held at Northwest Louisiana Veterans Cemetery on Friday, February 26, at 11:00 a.m., with Reverend Robert Beadle officiating. Burial will immediately follow the service.

Mr. White was born in Crowley, LA to Franklin and Myra Belle White on December 7, 1930. He attended Fair Park High School and Louisiana Tech University. He worked at Riley Beaird for twenty-two years and the City of Shreveport, LA for ten years. Mr. White resided in Shreveport for sixty years and moved to Benton in 1995, where he lived with his wife in the log cabin he built for retirement.

Mr. White was an ordained deacon and member of First Baptist Church in Benton. He served on the Bossier Sherriff’s posse and the Bossier Restoration Foundation. He belonged to Cypress Masonic Lodge No. 89 in Benton and Queensborough Masonic Lodge No. 418 in Shreveport. He was a member of the Red River Masonic Degree Team. Mr. White served in the Korean War in the 45th Infantry 279th Regiment as a Combat Veteran in 1951-1952. He belonged to the Korean War Veteran’s Association, Chapter 19, the Korean War Veteran’s Front Line Infantry Chapter 205, and The American Legion Post 202. He enjoyed astronomy, collecting Civil War relics, traveling, camping with his family and carpentry. He was a professional photographer and took hundreds of photos during his service in the Korean War, many of which were published in magazines related to the war.

In lieu of flowers, memorial donations may be made to First Baptist Church of Benton Children’s Ministry.

The family wishes to extend their gratitude to Southern Care Hospice Services for the loving care they provided during this difficult time.