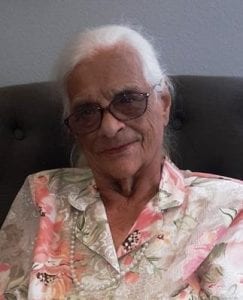 BOSSIER CITY, LA – Henny Auguste Conrad Bryant died peacefully in her home on Jan 20, 2016 in Bossier City, LA after a long illness in the presence of her loving family. She was 88 years old. Though dementia and confusion took most of her memories and left her unable to communicate, her strong faith during the course of her illness continued to be demonstrated by sharing her sculpted replica of Felsenkirche, the “church in the mountain” and an image of Christ praying with family and visitors.

Henny Bryant was born in Idar Oberstein, Germany, the youngest and final survivor of 11 siblings, on July 29, 1927 to parents Karl Ludwig and Sophie Conrad. She met and married Sergeant 1st Class Arlton J. Bryant when he was stationed in Germany serving in the United States Army.

Henny and Arlton retired in Bossier City after having lived all over the world during his career in the Army. She was blessed with a loving home and family which she made her full-time career. Her devotion to family and firm belief in God was evident in the way she lived her life. She will be remembered as a gentle and patient caregiver to her children and grandchildren. She lived a life of sacrifice, always placing the needs of others before her own. She will be greatly missed.

The family would like to thank: Neurologist, Dr. Richard Zweig, for his compassionate and thorough management of her illness; St. Joseph Hospice, and friend, Sharen Grigsby, who provided loving companionship during some of the most difficult times. Also, many thanks to her friends at Denny’s, Murrell’s and Southfield Grill, who always greeted “Mama” with a warm welcome and a hug and made her feel special. Those were precious memories —we have the pictures to prove it!

You may offer condolences to the family by visiting www.hillcrestmemorialfh.com.