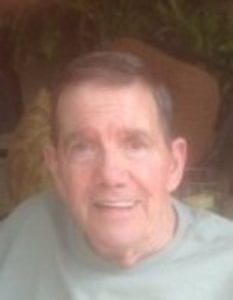 BOSSIER CITY, LA – James Fleming (Jim) Wigton passed away on February 24, 2016 from complications from his many years of battling Parkinson’s Disease. Jim was born on June 1, 1934 in Sewickley, Pennsylvania to John Lloyd and Fredericka Richardson Wigton. He grew up in Sewickley and before embarking on a career in the auto parts industry, he served his country in the United States Navy during the Korean War. After being honorably discharged from the service, he travelled the Midwest as a manager with the Uniroyal Tire Company. Finally landing in the Shreveport area, he worked for Chain Battery, Shade Tree Auto Parts, and notably, J & J Auto Parts, the business that he shared with his wife Janet. Together they not only supplied customers with auto parts, but also the expertise to fix their cars and a friendly ear to lend support.

Jim and Janet raised two daughters together, Jamie Wigton Moore of Blanchard, Louisiana and Marcy Smith Murray of Oil City, Louisiana. James was father to his family, but was known as “Pa” to many. Surviving Jim is his wife and partner of 51 years, Janet Williams Wigton of Bossier City, LA, his sister, Fredericka Achin of Pompano Beach, FL, and his daughters, Jamie Wigton Moore and husband Jerry and Marcy Smith Murray and husband Bill. Also surviving him are his daughter Barbara, and sons Billy, and Jimmy Wigton, all of, or near, Sewickley, Pennsylvania and step-son Jeffrey Smith and wife Manessa of Midland, Texas. Pa was blessed with 10 grandchildren and 5 great-children. Pa also leaves behind his special furry friends: Zeke, Ella, Zoe, and Sam. Numerous nieces, nephews, and cousins.

Pa had two special interests during his life: auto racing and the Pittsburgh Steelers. He took his young family on many trips to car races across the Midwest and Canada. He even served in a pit crew or two along the way. He was a Steeler faithful fan who never missed a televised game. Whether the season was going good or bad, he relentlessly cheered them on. “Go Steelers”.

We are grateful for the help of his doctors, Dr. Ted Warren and Dr. Richard Zweig, aiding his journey through Parkinson’s Disease. The compassionate caregivers at Garden Court in Bossier City, where Pa spent most of the last year of his life, are also greatly appreciated. Special thanks to Mo, Shvonne, Shaniqua, and Tan.

Funeral services will be 2:00 p.m. Saturday, February 27, 2016 at Rose-Neath Marshall Street Chapel, Shreveport, LA. Officiating will be Brother Jim Gstohl assisted by Dale J. Pracht. Visitation will be from 5:00-7:00 p.m. Friday at the funeral home.

The family suggests memorials may be made to Robinsons Rescue, 2515 Line Ave., Shreveport, LA 71115.