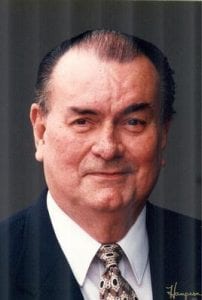 He came into this world in 1928 as the son of Lois E. Murphy and James Joseph Kearney. He lived out his boyhood days in the sun and surf of Savannah and Tybee Island in the care of his grandparents James L. and Della Owen. He became quite the movie enthusiast as a teenager and then blossomed as a natural salesman in his young adult life

It was later when he moved to Bossier City that he began to sell cars. He also found a new friend in Richard Ray “Buddy” Garrett and soon Buddy’s parents, Minnie and Davy Garrett of Hall Summit, affectionately claimed him as their foster-son. Red River Chevrolet employed Jim from 1973-2001; he was salesman of the year 19 of those and remained a loyal friend of the Fritze’s. Jim was Christian by faith and lived it through a spirit of generosity to others and a strong prayer life.

Though his favorite first cousin, Virginia, died last summer, Jim is survived by a few relatives in Savannah, GA, and California, Linda, Diana, Laura, and Gene, as well as a lot of members of the Garrett family who grew-up calling him “uncle”, including Richard Ray ll, Walter Eugene Jr., Mona Lisa; his great nephews Richard Ray lll, Thomas, his name-sake, James Kearney, and Brandon. He will be missed by other members of the Garrett family, and friends Mick and Mary Mitchell, wonderful neighbors, and countless Chevrolet customers.

The family wishes to extend gratitude to Dr. Alan J Borne and staff for their long time care and the nursing and support staff of WK Pierremont 4th Floor West.