Margene “Jean” Simpson was born on Sept. 23, 1930 in Bonham, TX and went home to be with her Lord and Savior March 14, 2015, after a lengthy illness and struggle with COPD. She was a member of First Baptist Bossier.

Jean was preceded in death by her parents, Joel Kelly and Freddie Cantrell, her only sister, Shirley Hammer, and her husband of 48 years, Bob Simpson. 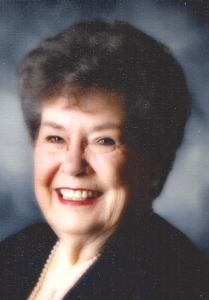 Jean grew up in Dallas, TX where she attended Adamson High School. Her various interests ranged from being a ballroom dance instructor for Arthur Murray Dance Studios, to raising and training German Shepherds, in obedience training with hand signals.

Jean moved to the Shreveport-Bossier area in 1960. She managed the Kelly Girl office from 1962-1974. When Kelly Girl made all franchises corporate owned, allowing no franchises, she opened her own business, Jean Simpson Temporary Employment in October 1974. After Jean Simpson Temporary Employment added a permanent placement division, she changed the name to Jean Simpson Personnel Services. JSPS has offices in Shreveport and Longview. Jean made a difference in so many lives in this community, and she made many anonymous donations to the Bossier Parish Sheriff’s Department, various schools, churches, and to any child in need. She had a beautiful smile, a generous spirit, and lived her life with honor and dignity.

She was an avid bowler and travelled all over the United States bowling in national bowling tournaments. Some of Jean’s favorite memories came from those bowling trips. She loved to fish and mow her yard.

To honor their Founder’s memory, the staff of Jean Simpson Personnel Services will serve as honorary pallbearers.

The family would like to extend a special thanks to long-term caregiver and friend, Lucille Webert, for her loyalty and devotion for more than 25 years.

Visitation will be at Rose-Neath Funeral Home in Bossier on Tuesday, March 17, 2015 from 4 p.m. to 7 p.m. Funeral services will be held in the Faith Chapel of First Baptist Bossier on Wednesday, March 18, 2015 at 2:00 p.m. Officiating will be Dr. Randy Harper, and Joe Huffman. Interment will follow at Hill Crest Memorial Cemetery in Haughton, LA.

The family suggest memorials may be made to American Heart Association , 4830 Line Ave., Shreveport, LA 71106 or St. Jude Children’s Research Hospital , 262 Danny Thomas Pl. Memphis, TN 38105 or to the charity of the donor’s choice.