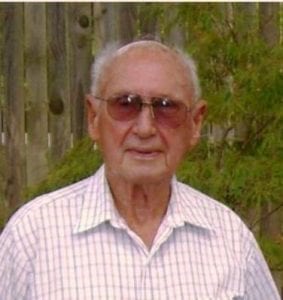 Jerry was born and raised in the Czech community of Kolin, Louisiana on a small family farm. He loved polka music, spoke Czech, and played accordian. After school, he joined the Army and was lucky to serve his time training airplane navigators in California. After the war, he began working at Binswanger Glass Company in New Orleans, which led to his long-time career. He and Blanche started American Glass Company in 1964 and continued there until their retirement in 1988. A special thanks to Leon “Sailor” Jones who worked with them and is still part of the family.

Jerry’s next “career” was lived out at their lakefront home on Black Bayou Lake in Benton, Louisiana where he fished as often as possible. He and his longtime friend, Ray Norwood, spent many hours on the lake at their secret brush piles. Jerry had an incredible garden and orchard, and loved to serve family and friends his famous fried fish. The grandchildren have lots of “Pawpaw” memories from many days swimming, tubing and fishing there.

The family would like to extend special thanks to Buck and Gayle Sowell, the best neighbors Jerry & Blanche could have had while living on the lake.