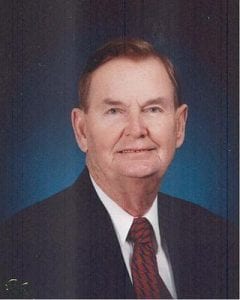 Jesse was born April 24, 1922 in Eros, LA to Marion Claude and Minnie Durham Deen. He was the youngest of five children, and spent his childhood in in Hargis, LA. He graduated from Montgomery High School in 1940 before attending Southwestern Louisiana University (ULL), where he earned his B.S. degree in 1943. After graduation, he joined the U.S. Navy and served during World War II in San Diego and Long Beach, CA. He began his teaching career as an agriculture teacher and coach at Rocky Mount High School in 1947. After receiving a Master’s Degree from the University of Arkansas, he became principal of Rocky Mount High School until his retirement in 1972. During his time as principal, he earned a plus 30 degree from Northeast State University.

He was active in civic organizations and served on the Bodcau Soil and Water Conservation Board; the Shreveport Bossier Vocational Board; and on the board for Willis Knighton Hospital. He was also a charter member of the Bossier Parish Sheriff’s Posse.

Jesse loved serving his Lord, Jesus Christ. He was an active member of Cypress Baptist Church where he served as a deacon and enjoyed the fellowship he had with his Sunday School Class. He delighted in spending his retirement days gardening and tending to his orchard. He was always ready to play dominos with family and friends, and he was an avid LSU fan who never missed watching the Tigers play.

He was preceded in death by his parents and his siblings; Lee Deen, Hazel Box, O.W. Deen, and Lucille Smith.

Jesse is also survived by his great grandchildren that he so adored: Maggie and Emma Caroline Cahn, Tyler and Georgie Deen, Hayden and Liam Deen, Matthew Jarrett, Chandler and Zoie Williamson, and Ashton Williamson. He will be remembered by a host of nieces, nephews, and cousins who loved him dearly. He was kind, wise, and giving, and he always took the time to have fun. He never let a moment pass without telling us how much he loved us.

A special thanks to Mattie Alexandria and Jacqueline Morning for the gracious love and care they gave to him.

“Finally, brethren, farewell. Be perfect, be of good comfort, be of one mind, live in peace; and the God of love and peace shall be with you.” – 2 Corinthians 13:11

Memorials may be sent to Cypress Baptist Church, or the charity of your choice .