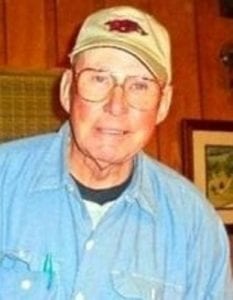 Haughton, LA – Services celebrating the life of John B. Wynn,Jr., 87 will be held at 10:00 a.m. on Tuesday, December 22, 2015 at Hill Crest Memorial Chapel in Haughton, LA. Rev. Allyn Stroud will be officiating. A graveside service will follow at 2:30 pm at Brownstown Cemetery in Brownstown, AR with Rev. Don Jones officiating.

John was born in Prescott, AR to John B. Wynn,Sr and Dellah Wynn on December 4,1928. He moved with his family at the age of 12 to Haughton, LA and graduated from Haughton High School. He attended Louisiana Tech and graduated from Centenary College. John wore many hats. He began as a geologist and later worked many years as an electrician at the Louisiana Army Ammunition Plant. But his first love was always ranching, which he continued to do until his passing. Affectionately known as “Big” by his grandchildren, he enjoyed spending time with his family.