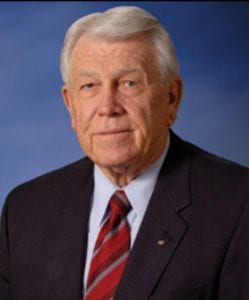 Mr. McConathy of Bossier City, LA went to be with his Lord and Savior Jesus Christ on April 19, 2016.  John was born April 9, 1930, in Sailes, LA, to his parents Oliver Leslie and Marie Cole McConathy.  A resident of Bossier City for 60 years, John was a wise and greatly admired leader in the community.  To many he was fondly and respectfully known as Mr. Chairman, Big John, Mr. John, Hound and Coach; to his family he was Daddy and Pappy.

Mr. John served as an educator for 31 years, starting his career in Bienville Parish School System. He spent the remaining 26 years in Bossier Parish, retiring as Bossier Parish Superintendent of Schools in 1983.  After his retirement, he enjoyed 20 years in the insurance business as a New York Life agent, at the same time while embarking on his new passion as a founding member of Citizens National Bank, serving as Chairman of the Board for 25 years.  After retiring as Chairman, he remained a Director until the time of his death.

John truly loved the Lord and the church. He and Corene have served the Lord together as active members of First Baptist Bossier for nearly 60 years, in many leadership positions.
John’s greatest pleasures were spending time with his family and working on his farm in Bienville Parish.  John was a graduate of Northwestern State University where he was an All-American basketball player. He was the fifth pick in the first round of the 1951 NBA draft. He was a constant presence at the NSU games for the past 17 years.  His support for the success of others was unwavering. He had a way of making every person feel important and appreciated.  His staunch work ethic and strong moral and Christian values made him an inspiring example to all.

Honoring their Pappy as pallbearers will be his grandchildren.

The family would like to recognize the following who meant so much to John: his Sunday School Class at First Baptist Bossier, current and former employees of the Bossier Parish School System, North Louisiana Retired School Superintendents Association, Directors and Employees of Citizens National Bank, Directors of Campus Facilities, Inc., Directors of the Ark-La-Tex Sports Museum of Champions, friends in Bienville Parish, all former teammates, students and players. The family would also like to extend a special thank you to Private Angels of Care – Nataki Epps, Bobbie Davis, Myesha Fisher, and Monice Jones for their care and compassion.

“The steps of a good man are ordered by the Lord: and he delighteth in his way.”
Psalms 37:23