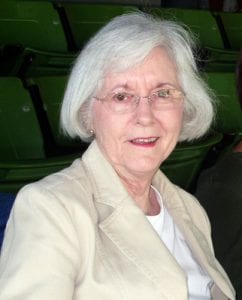 Joyce, 82, died November 1, 2015. She suffered from Alzheimer’s disease and the complications of falls, but she was able to fulfill one of her final wishes: That she die at the home she designed and loved.

Joyce was born on December 12, 1932, in Mt. Pleasant, Texas. She was the daughter of Charles Terry and Susan Veola Terry and was one of eight children.
She graduated from McLeod School in McLeod, Texas, and then moved to Shreveport, where she got a job at the telephone company. One of her duties was to work with telephone repairmen and installers, and that was where she met the man she would marry: Huey Hines. They married in July 1953. She called him “Hines” the day they met and every day for the next six decades. They were happily married for 62 years, made a life together and raised a family.

Joyce put her career on hold to raise her children. Later, she opened a jewelry business and helped many a man who needed an engagement ring or an anniversary or Christmas present. Colleagues and customers became lifelong friends. In retirement, the Hineses were regulars at Louisiana Downs, where they became fast friends with other retirees. Two of her great joys, outside of family and friends, were reading and working in her garden.

Joyce was preceded in death by her parents; six of her brothers and sisters; and her nephew, Michael Terry, whom she and her husband treated like one of their own children.

She is survived by her husband, Hines; her daughter, Susan O’Neal, and her husband, John; and her son, Gary, and his wife, Pam.

A sage once said, “We make a living by what we get; we make a life by what we give.” Life is made whole by family and friends. The Hineses have had incredibly good friends over the years who helped make their lives fuller. Hines and his family would like to particularly thank three couples who did so much for Joyce in her later years: Secil and Linda Skinner, Louise and Bob Bell, and Charles and Margaret McGaha.

The family would also like to express their gratitude to two sitters who cared for Joyce until the night she died: La’Seeta Alexander and Brenda Miles. They provided comfort and care every day and night.