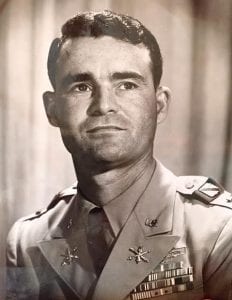 He proudly earned the combat infantry badge with one star for combat service in the European Theater in World War II and the Korean War, and Bronze Stars from WWII and Vietnam, and Purple Heart in WWII. After 26 years of military service, he retired from the Army as Lt. Col. He later worked as Director for the Louisiana Bureau of Emergency Medical Services where he worked tirelessly with fire departments to spearhead the development of the EMS system in Louisiana and, later, director of EMS services in North Louisiana.

Through all he accomplished in his life, the most important thing to him was his relationship with the Lord. Mac loved to study the Bible, mainly prophecy. He was an ordained deacon in the Baptist church. The love and kindness he showed to everyone who crossed his path was a shining example of how to live and love like Jesus. His most important endeavor and greatest desire for his life was to see all of his family come to know and love the Lord.
8 He hath shewed thee, O man, what is good; and what doth the Lord require of thee, but to do justly, and to love mercy, and to walk humbly with thy God? Michah 6:8

Visitation will be Thursday, August 4 from 5-8 p.m. and funeral service with military honors will be Friday, August 5 at 1:00 p.m. at Hill Crest Funeral Home, Haughton. In lieu of flowers, the family requests donations be made to St. Jude Children’s Research Hospital.