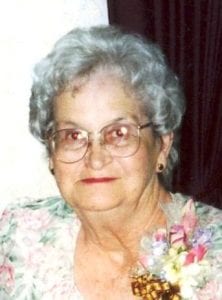 Mrs. Vaughan was born on  April 28, 1932 to Odie Lee and Sylvia Cobb Gore in Plain Dealing and passed away on Sunday, July 16, 2017 at her home in Plain Dealing. She was a faithful member of The First United Methodist Church, and a member of the Lambda Alpha Club. She was a mail carrier with the United States Postal Service, from which she retired after 20 years of service. She was very active in community and civic affairs and she enjoyed spending time with family, playing dominoes and hosting friends.

The family would like to extend special thanks to caregiver, Diane Tallant and also hospice nurses, Martha, Jamie and Shelia.

In lieu of flowers, the family asks that donations be made to the charity of your choice.