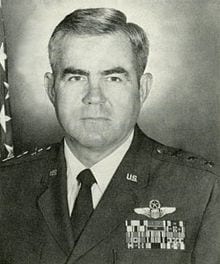 Lt. General Edgar S. Harris, Jr. USAF (ret.) passed away October 13, 2018 at the age of 93.  He was a true gentleman from the greatest generation who faithfully lived his values.

General Harris was born on May 24, 1925, in Danville, Virginia, the youngest of four children to Edgar S. Harris, Sr., owner of Harris Coal Company, and Lucy Phillips Harris, a renowned Bible scholar and lecturer.  In the 8th grade, he shared a science lab table with his future soulmate, Ethel Fowlkes of Pelham, North Carolina.  The General loved to tell stories of passing notes and cartoons back and forth.

Later, at George Washington High School, this fairy tale romance blossomed as they became a steady item.  By graduation, Eddie was an Eagle Scout and a United States Military Academy appointee.  He graduated in 1946 from West Point in the only three year class due to WWII, and Eddie and Ethel married four days later on June 8, 1946 in Pelham.  They began their first of 27 moves together in the U.S. Army Air Corps which became the United States Air Force the following year.

His illustrious career culminated as Vice Commander in Chief of Strategic Air Command and Commander of the Mighty 8th Air Force.

General Harris would often say he only succeeded up the ranks because of Ethel’s love and support.  They had three daughters along the way and retired with many wonderful memories of good friends made and places lived.  They chose to stay in Shreveport after retirement where the General became involved in community affairs.  He served as Executive Director of the Red River Valley Assn. and the Committee of One Hundred.  He had a keen interest in the relationship between the community and the Air Force, and was deeply involved in the Chamber of Commerce’s Military Affairs Committee with its support of Barksdale AFB.  He was honored with the official dedication of one of the historical houses at Barksdale AFB in his name -The Harris House- for use by distinguished visitors.

After 47 years of marriage, his Ethel passed away in September of 1993.  He later married Mary Catherine Meier and continued to be active in the community as well as travel.  The General was devoted to her care when she became ill, and Mary Catherine succumbed in October of 2015

Shortly after, he left his beloved Shreveport friends and moved to Granbury where he continued to be the sweetest and surely most loved father, grandfather, and great grandfather.  After three wonderful years of school programs, sports events, gin games, and family gatherings, the General passed away peacefully in the presence of his daughters.

General Harris was also preceded in death by his first-born daughter, Stephanie Miller and her husband Larry Miller, and his son-in-law Don Howard.

Donations may be made to The Lt. General Edgar Starr Harris, Jr. Scholarship Fund, est. in 2010 to benefit students planning to pursue a professional career in the United States military, through The Community Foundation of North Louisiana’s website www.cfnla.org/give with a note referencing this scholarship.

Local arrangements are under the direction of Wiley Funeral Home