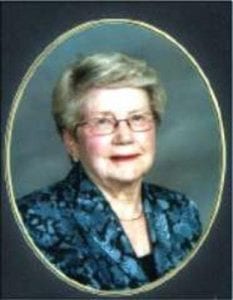 Lucille was born in Hall Summit, Louisiana, on August 19, 1923. Her parents died when she was very young. She lived with relatives until she was sixteen. She then came to Shreveport and lived with her brother where she graduated from C.E. Byrd High School in 1940.

She met her future husband, Buddy, who was a milkman for Jersey Gold Creamery delivering milk to H.L. Green’s on Texas Street. There he saw a blond beauty behind the counter. He said to the manager, “This is the girl I am going to marry.” They were married for the next 61 years. While serving in the Pacific during WWII, Buddy’s dream was to open a restaurant when he returned home. To achieve that dream, Lucille stayed with his sisters while saving the paychecks he sent home to be a nest egg for the restaurant. Their dream was realized when the Amber Inn Restaurant was opened in 1946 on East Texas Street in Bossier City, where Buddy and Lucille worked for the next 32 years.

Lucille was an excellent seamstress, which was evident in the clothes she made for her daughters. She continued her love of sewing by hemming and altering her own clothes up until a few years ago. Her love of fashion and clothes shopping continued after the restaurant closed, when she worked part time at Dillard’s in Pierre Bossier Mall helping to dress the ladies of Bossier City. After that, she worked at her daughter’s day care where she was lovingly referred to as “Ms. Dino.”

She was a member of Beta Sigma Phi Sorority where she held many offices and represented her chapter as their sweetheart. She also belonged to Cypress Area Garden Club in Benton where she fulfilled her love of flowers and decorating.

Pallbearers will be grandsons and sons-in-law. The family request that in lieu of flowers a donation be made to the St. Jude Catholic Church Building Fund.