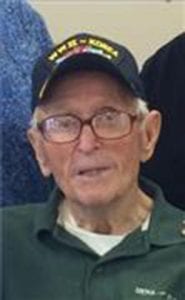 Oddis Evans Whittington, a/k/a “Whitt” “Pappaw” “Daddy” “O.E.”, went to Glory to be with our Lord on Monday morning, 2-29-16, at the age of 93 after a month long battle with pneumonia. His Christian Funeral will be held at Rose-Neath Funeral Home on Airline Drive in Bossier City on Thursday, March 3, 2016 at 2 PM with his interment at Hill Crest Cemetery. He will receive a USAF Military Honor Funeral. The funeral service will be officiated by close family friend Rev. Msgr. Carson LaCaze and will be assisted by Oddis’ great-nephew, Rev. Keith Collins. Visitation will be 5PM to 7PM Wednesday, March 2, 2016 at Rose-Neath Funeral Home in Bossier City.

Oddis was born on April 26, 1922 in Gloster, Mississippi to Ellen and Alvie Whittington. He was brother to Carmen, Cecil, Percy, Buford, Menton, Wendel and Nettie who have all preceded him in death.

Oddis was married to Marjorie Norris Whittington for over 56 years from 1941 until she passed away in 1997. They had five children during their marriage, James, Linda, Dennis, Karen and Glen. His oldest son, James Evans Whittington, passed away in 1994. In addition to the lone TDY Assignments, Oddis and his family lived in Ramstein Germany, Bossier City, LA, Omaha, NE, Jacksonville, AR and then retired from the USAF at Langley AFB, VA and headed back home to Bossier for their remaining years.

Oddis had a 28 year career in the United States Air Force serving his country in WWII, the Korean Conflict and the Viet Nam War. He entered into the Air Force at Selman Field, Monroe, LA in 1941 when the Air Force was still the Army Air Corp and he retired from the USAF in 1969. During WWII, he was the airplane crew chief for General Chennault in China and was given his commission as an officer in the UASF by the works of General Chennault around the time of the Korean Conflict. He continued his service through the years in the S.A.C. and then in T.A.C. during his Viet Nam mission. Oddis was awarded The Distinguished Flying Cross, and The Bronze Star during his war time service. He also received commendations for his Flying 100 Combat Missions and recognitions for his service excellence many times during his career.

After retiring from the USAF, Oddis worked with Shreveport Refrigeration and JC Penney performing services on Electronics. Oddis could work on anything from cars, planes to tv’s. He loved the sing-a-longs with his family and would sing along during programs at the NW LA Veterans Home. He could also cut-a-rug on the dance floor. He loved to hunt and fish with his sons, friends and other family members. Oh the stories told!

To serve “Whitt” as pallbearers will be his grandsons Daniel, James Jr. and Jeremy, his great-nephew Brad Whittington and friends Ray Judd and Steve Armitage.

The family thanks his special care giver Mrs. Thomas. The family asks that memorials be made to any Veterans group to aid with their disabilities or to the Leukemia Research Foundation, 191 Waukegan Road, Suite 105, Northfield, IL 60093.