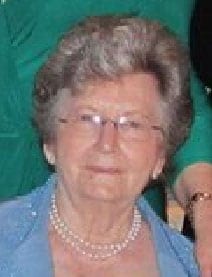 Plain Dealing, LA – Margaret Laree Martin Kumpf was born June 24, 1933 to Carrie Bell Bundy Martin and Joe Martin, from Plain Dealing, Louisiana where she spent her childhood. She passed from this world on December 3, 2017 in Round Rock, Texas. We rejoice in the confident knowledge of her continuing eternal life in the presence of God.

Laree was married to Thomas Charles Kumpf for 29 years until his death in 1982. They spent more than 20 years moving around as an Air Force family to Texas, Guam and North Dakota prior to retiring in San Antonio. They later moved to Bossier City, Louisiana were she resided for 34 years and was a member of the Airline Church of Christ.

Margaret, as she was known professionally, worked as a registered nurse for more than 45 years and was a member of the American Nurses Association, retiring as a head nurse from Overton Brooks VA Hospital in Shreveport, La. She was an active member of the retired nurses association. Laree served her community making quilts for Bossier Kids, and as a long-time worker in the Shared Harvest Kitchen ministry in Bossier City.

Visitation will be 5:00-7:00 pm, Friday, December 8, 2017 at the Bailey Funeral Home in Plain Dealing, Louisiana. The funeral service will be at 2:00 pm, Saturday, December 9, 2017 at Plain Dealing Church of Christ followed by a brief graveside service at Plain Dealing Cemetery. In lieu of flowers, memorial donations may be sent to Bossier Kids Foster Care or Shared Harvest Kitchen.