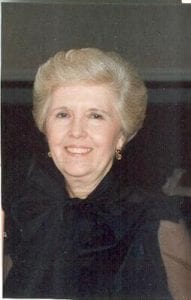 BOSSIER CITY, LA – Mary Jane Johnson passed away peacefully at home at the age of 87. She was born September 17, 1928 to Jack and Marie Seigler in Shreveport, Louisiana, and passed away on December 30, 2015. Visitation with the family will be held at 12:00 p.m. on Monday, January 4, 2016, at the First United Methodist Church in Bossier City with services following at 2:00 p.m. Interment will be at Hill Crest Memorial Cemetery in Haughton, Louisiana.

Learning and teaching were her lifelong endeavors. Mary Jane graduated from Bossier High School at the age of 16, and attended Southwestern University Institute (ULL) in Lafayette on a music scholarship, playing in the university’s band. After graduation in 1949, she began a career that spanned 36 years as an educator, beginning at Haughton High School as the Band Director. She later was the Librarian and taught music at Plantation Park Elementary, and finished her career after serving as the Librarian at Greenacres Junior High School for many years. Mary Jane loved school, and often cried when the summer break started as she would miss her students and fellow faculty members over the summer. After retiring from teaching, she worked for the Benton Library and the Bossier Parish Library until she chose to become a full time MiMi to her granddaughters.

Mary Jane was a devout Christian, and was active at the First Methodist Church in Bossier City for more than 70 years. She and Johnny served as MYF directors in 1952, shortly after they were married. She also sang in the church choir and served as the Youth Choir Director for many years.

Mary Jane loved genealogy. She enjoyed researching her family history and contacting long lost distant relatives, often traveling to meet them in person. She was devoted to her family. She loved and supported them in every endeavor. When granddaughters were young, they could often be found sitting in her lap while she read to them and taught them to read.

She was a gifted cellist and soloist with the voice of an angel, and was asked to sing at numerous weddings and other special occasions. She was a member of Sigma Sigma Sigma Sorority, and was so proud when her granddaughters also initiated into Tri Sigma. She was a proud member of the Daughters of the American Revolution and was a founding member of the Bossier City Mother’s Club.

Mary Jane was a devoted mother, daughter, sister and aunt. She was so very sweet, gentle and kind, and will be missed by everyone who was fortunate enough to have known her.

In lieu of flowers, the family suggests memorials be made to the First Methodist Church of Bossier City in her name, or to the Mary Paige Johnson Memorial Fund at Loyola College Prep.