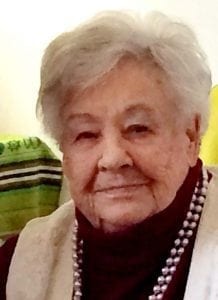 Maureen Taunton Melville passed away on November 2, 2017, in Baton Rouge, Louisiana. Born February 4, 1929, in Marion, Louisiana, she spent most of her adult life in southern Bossier Parish, living on and next to the Red River Valley Experiment Station at Curtis, where her husband David R. Melville, Sr., was for over thirty years a professor of agronomy.

Maureen was preceded in death by her parents, Ed and Lela, and her siblings, Agnes, Norma, Francis, Eloise, Thelma, Sonny and Charles, all of whom she loved and nurtured until their deaths. She lost her husband, the stable rock of her life, too early, and never tried to replace him.

Maureen is survived by children David R. Melville, Jr., and wife, Melanie, Josilyn Horne, and Cecilia Kay Snyder, and husband, Russell; grandchildren Jude, Daniel, Grace, Taunton, Jenny, Jessica, Joshua, Holly and Cliff, along with their wonderful spouses and their many children (including one on the way!). As a central member of a large, loving and vibrant extended family spread over Louisiana and Texas, she also leaves behind siblings Pat, Wayne, Joyce and Billy Joe (all of whom expressed great love and affection for their sister), and a host of admiring nieces and nephews and their children, grandchildren and great grandchildren, most of whom she knew not only by name, but by personality.

A woman blessed with confidence and natural hostessing skills, Maureen, or “Granny” as her grandchildren and their waves of friends called her, was the center of attention, filling lengthy visits with equal parts conversation and food. Whether due to a prodigious memory, an active curiosity for detail, or an often surprising sense of intuition, she even in her final weeks always seemed to know exactly what each member of her large family was doing and, just as important to her, how and when and why.

Maureen was a patriot, daily flying the American Flag; a celebrator of tradition, decorating her home carefully for each season; a born gardener, able to grow flowers it seemed sometimes just by accident; an irrepressible optimist, always in the process of making plans for events to come; and an imaginative participant, if often vicariously, in the world, regularly studying maps to capture a sense of exactly where her family traveled and religiously reading the newspaper to keep up with the latest comings and goings of the broader community. She was a lover of Jesus, believing always in the eternal life He offers and that she now enjoys.

A service of Death and Resurrection for Maureen was held on Saturday, November 11, 2017, at Hill Crest Memorial Park and Funeral Home in Haughton, Louisiana, followed by a graveside committal and reception at Hill Crest. Officiating was her son, Reverend David Melville. Honoring Maureen as pallbearers were grandsons Jude Melville, Daniel Melville, Taunton Melville and Cliff Snyder, great-grandson Caleb Green, and nephew Ed Taunton. Memorials may be given in Maureen’s name to Christ in the City and mailed to 1795 Parker Street, Baton Rouge, LA 70808.