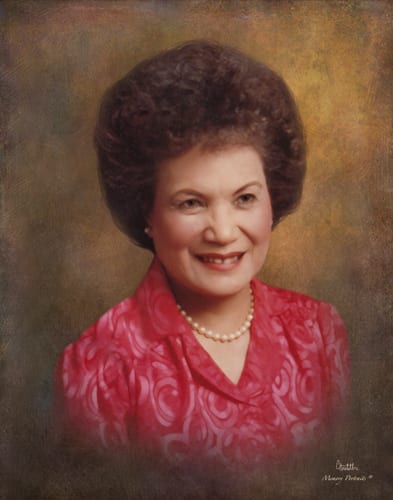 Bossier City, LA – Medina R. Paro, age 89, of Bossier City, LA passed away on February 18, 2019 after a brief illness. Services will begin with a Visitation at 11:00 AM until 12:45 PM, followed by a Funeral beginning at 1:00 PM, with Fr Derek Povlovski presiding. Each will take place on Monday, February 25, at Hill Crest Funeral Home, Haughton, LA.

Medina was born to the late Julian and Genara Reyes on 11 November 1929 in Bauang, La Union, Philippines and was the youngest of a family that included six children. Medina graduated from Pangasinan Provincial High School in Dagupan City, Philippines, and received a B.S. in Education from Far East University, Manila, Philippines in 1952.

She married the late Edward S. Paro, Jr. in 1962 and lived a somewhat global life as they travelled in his role as an active duty member of the United States Air Force. They settled in Bossier City in 1976. Medina was passionate about her family and her religion as well as her dedication to excellence in all of her endeavors.

She enjoyed being an active member of Holy Family Catholic Community as a lector, prayer leader, and Lay Eucharistic Minister. Medina’s organizational abilities led her to an almost fifty-year history of civil service where she was regularly lauded for her achievements. She was a problem-solver, mentor, and role model to many generations of young airmen and seasoned officers in her role as a secretary at Barksdale Air Force Base. She retired from service from the 608th Air Communications Squadron, Headquarters 8th Air Force in 2010.

She is survived by her children Edward and Sharon Paro (Shreveport, LA), Anne Marie and Daniel Fowler (O’Fallon, IL), Phyllis and Mario Lopez-Velazquez (Las Vegas, NV), and Joan and Rick Reyes (Corpus Christi, TX), twelve grandchildren, and thirteen great-grandchildren.
In lieu of flowers, her family requests that donations be made to the Alzheimer’s Association or the American Diabetes Association, two diseases that struck Medina during her lifetime but that never stopped her from living her fullest life.