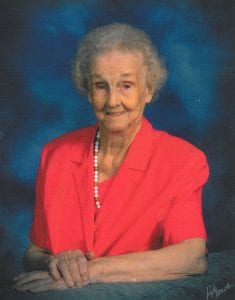 Visitation will be held at the Plain Dealing Baptist Church Tuesday, from 1:00 to 3:00 p.m.

Nenner was a longtime member of the Plain Dealing Baptist Church and was an active member of the Faithful Workers Sunday School Class and also the Priscilla Sunday School Class. She also enjoyed participating in the ADS activities. Nenner was known for her love of cooking. She loved having her family come for dinner and was especially good at making fried pies. She had many interests such as gardening, quilting, crocheting and visiting with friends.

She married W. C. DeMoss in 1958 and they lived in Rocky Mount, LA for many years before he died. She was also predeceased by an infant son, Glen Dale Wallace and also by a daughter-in-law, Betty Wallace. She is predeceased by her parents, three sisters and four brothers. Her first husband and father of her children, D. W. Wallace, died in 1956.

In lieu of flowers, memorials may be made to the Plain Dealing Baptist Church ADS Group or the LA Baptist Children’s Home.