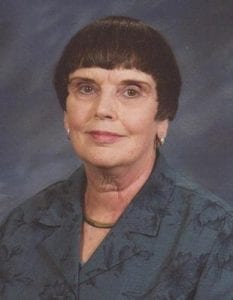 BENTON, LA – Funeral Services celebrating the life of Norma Joyce Poland Staples will be conducted at Cypress Baptist Church in Benton, LA on Tuesday, December 22, 2015 at 10:00 a.m. under the direction of Brother Billy Pierce, who along with his wife was a loyal family friend for many years. He will be assisted by Brother John Fream, Pastor of Cypress Baptist and her close friend Bro. Tommy Patton. Burial will follow at Bistineau Cemetery. Visitation will be held Monday, December 21 from 5:00 p.m. to 7:00 p.m. in the chapel at Hill Crest Funeral Home in Haughton.

On December 18, 2015, Norma was called to her heavenly home to be reunited with her beloved husband Ronald L. (Jerry) Staples. She was born on December 11, 1938 in Heflin, Louisiana to R.L. and Nicie Merritt Poland. After graduating from Heflin High School, she attended Ayers Business College and was employed as a secretary to the President of SWEPCO. She also worked as a mannequin dress model at two different dress shops in downtown Shreveport. This was during the time she met the love of her life on a blind date. Jerry subsequently proposed to her as she stood on the turnstile in a dress shop window. She continued to work at SWEPCO while Jerry was stationed in the Air Force at Barksdale, until she joined him on assignment in Omaha and in Okinawa at Naha Air Base. When Jerry was sent to Thailand, she went back to school to earn her LPN nurse degree and was employed at Highland Hospital as a float nurse before she became a permanent OB-GYN nurse. She retired after 25 years of helping others.

After their retirement in Benton, Louisiana, she and Jerry continued to enjoy years of square dancing and she devoted time to her flowers and shrubs. She had picked up the desire to garden while they were stationed in Okinawa with the many native flowers and plants she cultivated there. She also enjoyed cross-stitching special pieces for her family and friends.

She was predeceased by Jerry, her loving husband of fifty-five years, her only beloved child, Barry Edward Staples, her brother Charles Dale Poland and nephew Keith Turner.

She is survived by her brother Phillip Poland of Heflin, her sister Rhonda Rollinson and husband Paul of Minden, her nephew Jack Bridges and his family of Doyline, her niece Penny Marsh Womack and husband Doug of Grasonville, Maryland. Penny and Doug were very special relatives to her and Jerry.

God blessed Norma and Jerry with a very special love and relationship throughout their lives together (54 years, 9 months and 2 weeks). “When their paths came together and they found one another, it was really only the beginning of the most beautiful journey of all-the journey of two hearts that beat as one.” They truly became one as God commanded in Genesis 2:24.

Special thanks to Dr. Dan Moller for the excellent and personal medical care he gave her and Jerry. Dr. Harvey Long as Jerry’s fishing buddy and family friend; Al Levine as Jerry’s dedicated hunting buddy, family friend and help with her computer; John and Elaine Byrd for the close friendship and many years of square dancing together in the Square D dance club; Herb and Ann Hamaoaka for their close friendship and support; William R. (Randy) Long for his friendship and help as her lawyer and Robert (Bob) Brubaker her CPA, financial advisor and friend. Also to the United States Air Force which afforded her and Jerry many opportunities to develop friendships and a wonderful life together. She loved being a military wife in the USAF with a special love for B-52 as a symbol of strength and peace.

Philippians 4:13-I can do all things through Christ who strengthened me. “I love every one of you. Don’t be sad for me. I am in my heavenly home with our Lord and Savior and my beloved Jerry. I have missed him so much.”