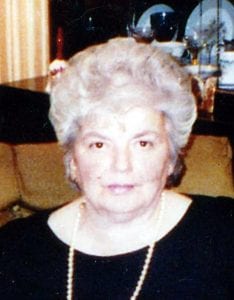 Services celebrating the life of Norma will be held in the chapel of Hill Crest Funeral Home on Tuesday, March 22 at 11:00 a.m. officiated by Father Joseph Ampatt. Burial will follow in Hill Crest Memorial Park. The family will receive friends at 10:00 a.m. She passed away on March 9, 2016 in Bossier City, Louisiana. Norma was born on August 8, 1922 in Brooklyn to John Ercole and Rose Grecco Zanelli, New York where she grew up.
She graduated from St. Francis of Assisi Catholic High School and Business College with a degree in accounting. She worked for a shipping company; then, for IBM as a key punch operator and programmer. At the start of WWII, she worked for the USO in the Empire State Building.

Norma married James William Roat on June 23, 1945. They were happily married for 62 years. While Norma was working for the USO on the 73rd floor of the Empire State Building, a B25 bomber strayed off course during heavy fog and crashed into the Empire State Building on the 79th floor. Jim frantically searched for Norma until she was able to escape the heavily damaged building and contact him.
Not long after Norma and Jim were married, they moved to Royal Oak, Michigan. In 1953, they moved to Louisiana eventually settling in Bossier City in 1955. Norma was supportive of her children being PTA President and Scout leaders locally and regionally. When her children were older, she was employed by Skyline Mobile Home Manufacturing in Bossier City as the Southern Regional Office Manager. Norma loved sewing and was an outstanding seamstress. She also enjoyed golf and going to the casino with her husband.

Norma was preceded in death by her husband, James William Roat, her sister, Mary Moreno, and her brothers, Joseph and Michael Zanelli.
She is survived by her daughter, Marilyn Roat Weber (Bernie); her children: son, Brent Starck (Phoebe Kreizer) and their sons: Gus, Owen, Hugh, and Fred; daughter, Melissa Starck Wells (Keith) and their sons: Brendon and Harrison; and son, Kevin James Starck. Norma is also survived by her son, James William Roat, Jr. (Kathleen Umphries), their children: son, Richard Roat and his daughter, Maylin; and daughter, Heather Shearer and her son, Christopher.

A Tribute to Norma Carole Zanelli Roat
As a mother no one could have been a more perfect MOM. She was the most selfless, kind, encouraging, and loving human being. We could not have been loved more. We will miss you—always…Norma, lovingly known as Mema, will be greatly missed by her grandchildren and great grandchildren. She enjoyed playing games with them and loved them dearly.
The family of Norma Roat would like to thank the hospice nurses, the staff and RAs at Bloom, and all the residents who showed love and kindness to Norma.
In lieu of flowers, the family requests donations be made to Shriners Hospitals for Children or Regional Hospice, 8660 Fern Avenue, Shreveport, LA 71105
To leave online condolences, please visit our website at www.hillcrestmemorialfh.com