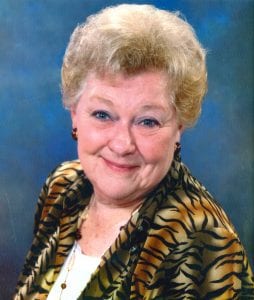 Ruth grew up on the family farm and had two brothers, Harold Dee Cash and Sam Oscar Cash. Her mother Lizzie Cash was severally injured in a fire at the home in 1940 which resulted in having to be taken to the State Hospital in Oklahoma City, Oklahoma for treatment due to the severity of her burns. Lizzie was the first skin graft patient to survive the treatment in the State of Oklahoma, however during her recovery process she contracted tuberculosis at the state hospital which she suffered from until her death on December 5, 1944. Lizzie’s death was a great loss to the family and Ruth at age 13 had to take over helping her father run the family farm and raise her two younger brothers. Ruth continued to attend school at Pittsburg, Oklahoma, help her father with the farm and raise her two brothers until June 4, 1948 when she married Jiggs Wingo.

Jiggs had returned to Kiowa, Oklahoma after his service as a barber in the U. S. Navy during World War II having served on several ships taking combat troops to Europe, the Mediterranean and the Pacific. Jiggs had developed a quick interest in Ruth while attending the Pentecostal Church in Kiowa, Oklahoma where Ruth was a regular member, singing in the choir, playing the guitar, singing in the early morning gospel trio radio show and evangelistic preaching throughout the area. Jiggs had taken up ranching and trapping in the hills of the Jack Fork Mountains Southeast of Kiowa and had remained in the U. S. Naval Reserve. Jiggs and Ruth’s first son, Larry DeWayne Wingo, was born on April 27, 1949 at McAlester, Oklahoma. On September 7, 1950 Jiggs was recalled to active duty with the U. S. Navy for the Korean War and was stationed at Soeul Korea at the rank of First Class Petty officer and was discharged on May 21, 1951 ending his military service. Jiggs and Ruth’s daughter Janet Ruth Wingo was born March 3, 1952 and son Paul Edward Wingo was born January 29, 1954 at McAlester, Oklahoma.

In about 1960 Jiggs opened his own barber shop in Nichols Hills, Oklahoma and Ruth began work as a secretary for Dr. Don O’Donoghue, chief orthopedic surgeon at the University Medical College, a teaching facility, at Oklahoma City. Ruth and Jiggs divorced in 1965. Ruth continued to worked for Dr. O’Donoghue until about 1970 when she went to work for Dr. Ide Smith, chairman of pediatric surgery, at the University Medical College where she worked for about two years, after that time period Ruth left the medical field.
In 1973 Ruth went to work with the Ling-Temco-Vought Corp. in Oklahoma City as an executive secretary and then worked for the IBM Corp. in Oklahoma City as a secretary. Over the years Ruth had been a very active member of the “Executive Secretary Organization’ and held office at several different levels.

In 1974 Ruth began a new phase of her life in the real estate industry. She began work as a real estate associate with the, JoAnn Wolfe Real Estate Company, of Oklahoma City which specialized in rural farm and ranch land sales across the state of Oklahoma. In 1976 Ruth began her own real estate company, HOMA Realty, which specialized in residential home sales and land development with her husband Leon Joseph “Tony” Vrana. Ruth and Tony had met in Oklahoma City in 1974 and were married in 1975. Tony had three children by a previous marriage, John Charles “Chuck” Vrana, Ellen A. “Tina” Vrana and Melissa J. “Missy” Vrana. Tony had served in the U. S. Army Air Corp, 509th Composite Group, in World War II and had been assigned as radio repairman to the B-29 Bomber, Enola Gay, Tinian Island, Pacific, which dropped the first Atomic Bomb on Hiroshima, Japan. Tony said he was very proud of his service for the United States during World War II and had never lost a minutes sleep over the bombing of Hiroshima. Ruth and Tony were very successful in real estate for many years, however Tony became very ill and died of heart disease on November 11, 1996 and was buried at Saint Teresas Catholic Cemetery in Harrah, Oklahoma.

After Tony’s passing Ruth moved to Haughton, Louisiana to live with her daughter Janet Ruth Wingo-Wolfe who had recently divorced from her husband, Dr. Rickey Joe Wolfe. Janet and Rick had married when Rick was attending the O.S.U. School of Veterinary Medicine at Stillwater, Oklahoma. They had three children during their marriage Robin Lynn Wolfe, Tammy Jo Wolfe and Richard Sigle Wolfe. After settling in Ruth went to real estate school in Louisiana and obtained her real estate brokers license. Ruth and Janet started a land development and leasing company, however due to the poor economy in the area at that time they had to close the company after about two years. Ruth continued in real estate sales for a short time longer before retiring.

One of Ruth’s pet projects over the years had been trying to reestablish contact with her mother’s family which had been lost back in the 1930’s. With the new genealogy tools now available she was able to find her Aunt Ruth Baker-Chappell and her daughter Weggie Chappell who lived at Winona, Texas which was just a short distance from her home. They were able to reestablish family ties for several years before her Aunt Ruth died in 2011.
Ruth Vrana had been battling several different medical issues over the past several years and finally passed from this life on August 20, 2016.

Memorial’s can be made on her behalf to the St. Joseph Indian School 1301 North Main Street Chamberlain, South Dakota 57325.
Words of comfort may be shared with the family by visiting www.hillcrestmemorialfh.com