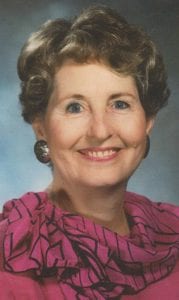 Pearl was born January 10, 1932 in Hebert, Louisiana to Sam A. Abraugh and Dorothy Barnett Abraugh. She graduated from Mangham High School in 1948. After moving to Monroe, Louisiana she was employed by Southern Bell Telephone Company for seven years. She married Howard Edward (Harry) Maxey in 1951 and became mother of three children, Paul Howard Maxey, Gary Dean Maxey, and Barbara Jean Maxey Wilhelm.

Preceding the death of her husband in 1961 she enrolled at Northeast Louisiana University where she received her Bachelors of Art and Masters in Education. Ever driven, Pearl earned her plus thirty hours in supervision at Louisiana Tech and qualified for principal in 1979. She taught school in Ouachita Parish and worked as a reading and math coordinator. She served as principal at Woodlawn Elementary School for one year before becoming principal at Kiroli Elementary School where she worked for 16 years until her retirement in 2001. She served the Ouachita Parish School System faithfully for 33 years.

Mrs. Maxey Wells was a member of First Baptist Church in West Monroe, Louisiana for 50 years. She married Leon Mathis Wells in 2006 and moved to Bossier City, Louisiana where they became members of Cypress Baptist Church.

Her grandsons will serve as pallbearers.