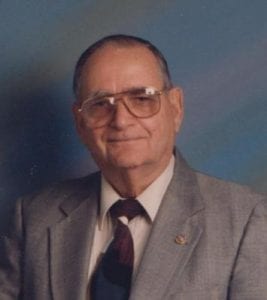 Printice Alvin Darnell was born September 21, 1918, in Arcadia, Louisiana, to Virgil and Mary Darnell, and passed away July 30, 2016, in Bossier City, Louisiana, at the age of 97. Printice moved to Bossier City with his family when he was a few months old and graduated Salutatorian from Bossier High School in 1935. His service to his country began in 1944 when he joined the United States Army during World War II. He served in New Guinea, the Philippines and Japan, achieving the rank of Staff Sergeant and was awarded two Bronze Stars, the Good Conduct Medal and World War II Victory Medal.

Upon returning from the war, Printice began his life of service to veterans and the citizens of Bossier Parish. He owned and operated Darnell Cleaners for over 40 years, during which time he never charged the Police Department or Fire Department for his dry cleaning services to them. He also owned and operated Brickstone Products. He joined the Gandy Brown Post 4588 of the Veterans of Foreign Wars in 1946 and serviced as Post Commander, State Commander, and even in his 90’s volunteered at the post. He was the Judge

Advocate for the VFW until his death, and the oldest living past state commander. Printice was also a member of the Organization Committee for the Boy Scouts of America, National Hospital Committee of the VFW, VFW By-Laws and Procedure Committee. He was a charter member and one of the organizers of the Bossier Jaycees, and a member of the Lions Club, past president of Toastmasters Club, as well as serving on the Bossier City Police and Fire Civil Service Board. Printice founded the 12th District Honor Guard, participating in many veterans funeral ceremonies and patriotic functions over the years.

After his first retirement, he served as Bossier City Marshal, and later as Bossier Parish Veterans Service Officer for many years, before retiring a second and third time. He was appointed by then Governor Buddy Roemer as Executive Director of Veterans Affairs for the State of Louisiana. After his last retirement, he volunteered as a school crossing guard and a night guard at Louisiana Downs.

Printice was a member of St. George’s Episcopal Church where her served on the vestry, was a lay reader and past Senior Warden.

Printice loved his LSU Tigers, and arm chair coached many a football and baseball game. He never criticized a player, but was very opinionated about the coaches and their coaching. He sponsored many Dixie League Baseball and Softball teams locally over the years, and never missed a chance to watch the Little League World Series. He attended countless sporting events to see his children and grandchildren play and was always encouraging and cheering them on from the sidelines.

The family would like to express their sincere appreciation to the administration and staff of the Northwest Louisiana War Veterans Home for their loving care of Mr. Darnell during his 3 year residency, and in particular Byron Hines , Dr. Roy Fleniken, and Rhonda Johnson, as well as the aides on Wing 1. The family also thanks the Christus Schumpert Hospice for their compassion and care during his last few weeks.

Visitation will be held at Hill Crest Funeral Home in Haughton on Friday, August 5, 2016, from 5:00 p.m. to 7:00 p.m. Services will be conducted by Fr. Jamie Flowers at Hill Crest on Saturday, August 6, at 3:30 p.m. Interment will follow in Hill Crest Memorial Park.
I have fought a good fight, I have finished my course. I have kept the faith: Henceforth there is laid up for me a crown of righteousness which the Lord, the righteous judge, shall give me at that day; and not me only, but unto all them also that love his appearing. 2 Timothy 4:6-8.

You may offer condolences to the family by visiting www.hillcrestmemorialfh. com.