BOSSIER CITY – Services to celebrate the life of Ralph Lee Mitchell, 86, will be held at 11:00 a.m.,  Thursday, April 20, 2017, at Waller Baptist Church,  Bossier City, LA, officiated by Dr. Gary Johnson.  Visitation will begin at 10:00 a.m. prior to the service.  Interment will follow at Hill Crest Memorial Park, Haughton, LA.  Ralph, or Buddy as he was known by many, was born to Russell S. and Frieda Feibel Mitchell at the family home in the Cedar Grove area of Shreveport, LA on February 12, 1931 and passed away in Bossier City on April 17, 2017. 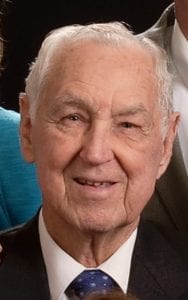 Buddy graduated from Bossier High School where he met his future wife Hope Evans.  He and Hope  were married a few years later, just weeks before he reported for duty in the United States Air Force during the Korean War Era.  After leaving the Air Force Buddy and Hope returned to Bossier City where they settled and raised their family.  After Buddy retired from the U.S. Postal Service he worked for U.L. Coleman until his second retirement.  His last “career” was working at Yellowstone National Park for many summers alongside Hope.  Buddy loved to travel and took his family on trips all across the country.  He and Hope visited several countries in Europe and went on many cruises.  In addition to traveling Buddy enjoyed fishing , woodworking, jigsaw puzzles, playing bingo along with Hope, and making jewelry using beads he made himself.   He was a very generous man sharing a good deal of the items he hand crafted.   Mostly Buddy loved and enjoyed his family, always there to lend a hand when needed and to serve as the patriarch and spiritual leader of his family.  Buddy was a long time member of Waller Baptist Church where he served in a number of roles including ministering to the church body as a deacon and influencing the lives of young men as a Sunday School teacher.  He was strong in his faith and secure in his salvation, the family takes great comfort in knowing his final destination.

Buddy was preceded in death by his parents.  He is survived by his wife of 65 years, Hope, his sister Mona Mitchell Fowler of Bossier City, LA, his daughter Rebecca Mitchell Mayer and husband Carl of Haughton, LA, his son Ralph Lee Mitchell II and wife Lisa of Daphne, AL, his grandchildren Bryan Phillip Mitchell, Angie Mayer Dredge and husband Harlan, Margaret Mayer Digilormo and husband Brandon, Dylan Mitchell and Samantha Mitchell, great grandchildren  Cole, Lane, Cannon and Carlan Dredge and Braeden, Ella Hope and Talon Digilormo.  He was much loved and will be greatly missed by every member of his family and his many friends.