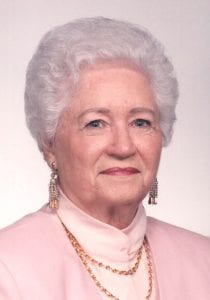 She was a realtor for James M. Brown for several years. Loraine was a long time member of Bellaire Baptist Church. She touched and influenced many lives and taught Bible studies up until the last few months of her life.  Her family was her most treasured possession. In her 93 years, she happily saw and prayed for the many family members added to her legacy.  She was the widow of the late John W. Davis to whom she was married for 54 years.