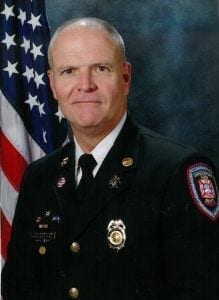 Benton, LA – Chief Robert N. Robinson, Jr. (Chief Bob) was born on February 25, 1949, in Shreveport, LA and went to be with our Lord on May 30, 2018, following a faith inspiring valiant fight against Glioblastoma Multiform (GBM) an aggressive brain cancer. He would ask that we celebrate his ‘final promotion’ and not grieve our loss as it is his gain! He was a member of the Boy Scouts and earned his Eagle Scout in High School. He was a graduate of Fair Park High School in 1967 and attended LSUS. He then joined the Army National Guard Co. B 1st Btn. 156th Infantry and served his country honorably and was discharged as a Staff Sergeant.

In 1970, following his father’s footsteps he joined the Shreveport Fire Department. In 1975, he married Lisa his wife and soulmate for 43 years. Bobby is survived by his wife Lisa Frady Robinson, daughter Shelley Robinson Parlow and husband Rodney, son Robert “Trey” Robinson and wife Rebecca and two sons Neyland and Peyton, daughter Haley Robinson Wall and husband Joey and their two daughters Kierstin and Jada.

In 1980, he started his business “The Chimney Man.” He also, worked for Christus Schumpert Medical Center in 1991, driving the Critical Care Transport for several years.

Chief Bob devoted his life to the citizens of Shreveport, Louisiana with 39 years of fire service with SFD and retiring at the rank of Assistant Fire Chief in 2009.  He earned the respect of many fireman throughout his career by setting a Christian example and was known by all who knew him as the “Fireman’s Fireman.”  In 2005 during Hurricane Katrina, he led a team of SFD firefighters “Strike Team Bravo” and was later recognized for his undefinable leadership.  Upon his retirement Shreveport Mayor Cedric Glover proclaimed November 10, 2009 as “Chief Robert “Bobby” Robinson Day.”  In 2010, he began working for Desoto E.M.S as medic and did so until he was diagnosed with brain cancer.

Bobby lived such a full and purposeful life and his work ethic and Christian traits will be ingrained in so many others for years to come. Bobby LOVED: His Lord, his family, his church, people. He was a man’s man, a Godly man, and a devoted family man.

The family would like to give a most heartfelt thanks to SFD, Desoto EMS, Dr. Christina Notarianni, Susan Steen, PA, Dr. Troy Richards, Jessica Bennett RN, Dr. Gary Burton and Greg Michael RN, Aime Hospice Care, also friends and family for all of their compassion, love, excellent care and dedication always above and beyond the call!

In lieu of flowers the family suggests that donations may be made to Cypress Baptist Church, in memory of Bobby Robinson.

Funeral services celebrating the life of Robert N. Robinson Jr. (Bobby) will be held at 3 p.m. on Tuesday, June 5, 2018 at Cypress Baptist Church. Officiating will be Pastor John Fream, along with former Shreveport Fire Chief, Bo Roberts. Visitation will be held at the church starting at 2 p.m. (prior to the service).

Honoring pallbearers will be all of those who worked with him throughout his career on the S.F.D and Desoto EMS.