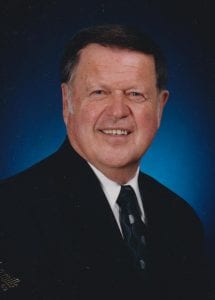 Sammie graduated from Bossier High School in 1951, then to LA Tech where he finished in 1957 with a degree in Civil Engineering and Business Administration.   In June 1957, he became the first City Engineer of Bossier City.  After 14 months, realizing he was not a politician, he went to work with an engineering consulting firm in Shreveport.  In 1960, he became cofounder of the first engineering/surveying  firm in Bossier City, Williamson and Craft, with offices in Minden and Bossier City.  In 1963, he continued professional practice as Sammie L. Craft, Engineer and Land Surveyor.

In 1970, he founded the firm of Sammie L. Craft & Assoc ., Inc.,  again providing a broad range of engineering and land surveying services.  Engineering services included design and supervision of construction of water, sewer, streets and drainage for private development of many residential subdivisions.  Also included were the design and supervision of construction of deep wells, pumping stations, storage facilities and distribution of numerous FHA rural water systems, some in excess of 25 miles of distribution lines, in Louisiana and Arkansas.  Surveying services included boundary, topographic and construction layout.

In 1986, he again joined the City of Bossier and City engineer, supervising the Dept. of Engineering, the Dept. of Traffic Engineering and the Dept. of Permits & Inspections.  Responsibilities included design of numerous public works projects, plan review of private development; plan review of private consultants of numerous public works projects and inspection of all construction.  From the initial stage of the Arthur Teague Parkway, he was responsible for review of plan design, inspection of construction of over 6 miles of the thoroughfare and connecting tributaries.  He oversaw the design and construction of a 1.5 million dollar, city-wide traffic signalization improvement system.  His responsibilities of the Dept. of Permits & Inspection were the monitoring plan review and issuance of building permits and inspection of a GPS department, later assisting the Tax Assessor in setting up its department.  He also initiated the establishment of a GPS monument system for surveyors, setting up numerous horizontal control stations around the city.

In 1995, he again entered private practice, continuing to offer services under the name of Sammie L. Craft & Assoc.; Inc.  He has served as interim Parish Engineer during which time he initiated the North/South Corridor.  In 2002 he established a GPS monument system for the Parish.  He, along with many others, reestablished the boundary between Bossier and Caddo Parish to settle a dispute between the parishes as to location of gambling boats along Red River.  Sammie has served as President of the LA Land Surveyors Assoc.; Benton Lions Club and Master of Cypress Lodge #89