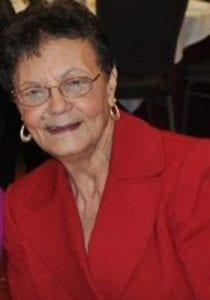 BOSSIER CITY, LA — Funeral services to honor the life of Shirley Metoyer Abrams will be held on Saturday, December 12, 2015 at 11a.m. at Holy Trinity Catholic Church in Shreveport, Louisiana with Father Charles Glorioso officiating, assisted by Father Joe Kallookalam and Monsignor Earl Provenza. Interment will follow at St. Joseph’s Cemetery. Family visitation and rosary will be held at Holy Trinity Catholic Church on Friday, December 11, 2015 from 6:00 p.m. until 8:00 p.m.

Shirley was born September 2, 1937 in Natchez, Louisiana to the late Russell N. and Mary Moran Metoyer. She was baptized at St. Augustine Catholic Church at Isle Breville (Cane River community). She was preceded in death by her husband of 53 years, James H. Abrams, Jr., her maternal grandparents, Frank Moran, Sr. and Augustine Rachal and her paternal grandparents, St. Ann and Catherine Metoyer. She was a member of Christ the King Catholic Church. She served as a lecturer and was a former member of the bereavement committee and altar society. Shirley was a graduate of Booker T. Washington High School Class of 1955. She enjoyed meeting people and was employed in the retail industry for many years, and retired from Walmart as the store photo manager in 2003.

We express our sincere gratitude and thanks to Dr. Anil Veluvolu, Dr. Michael Durci, and the aides and staff of Willis Knighton Cancer Center as well as the other physicians and staff at the Willis Knighton hospitals who provided her excellent care during her serious illness.

Memorials may be made in her name to one of the many support groups at the Willis Knighton Cancer Center or the American Cancer Society .