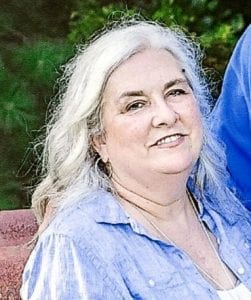 On August 3, 2017, after complications from surgery, Sylvia went to be with her Heavenly Father. The earthly limitations placed on her body have been lifted and she is free! Praise God!

Sylvia was born February 11, 1956 to Jeane and Harold Newsom of Sarepta, Louisiana. She was one of five children; she had two brothers and two sisters. She loved being a part of a large family and was very proud of her small-town upbringing. A self proclaimed “daddy’s girl”, one of her favorite childhood memories was singing alongside her father in church.

Sylvia graduated from high school in Sarepta during the time her father was principal there. She went to Northwestern State University where she earned her Bachelor’s degree in Early Childhood Education/Teaching. Later on she went to Centenary College where she procured a Master’s degree in Education/Administration and Supervision. Her formal education ended there, however she was an avid reader and a proponent of lifelong learning.

Sylvia was a teacher and then an administrator in the public school system for over 30 years. Teaching was her calling, her passion and her God-given gift. She inspired and impacted countless lives throughout her career. It was not unusual for past students to contact her years after being in her classroom to share their accomplishments and thank her for her influence.

She retired in 2011 and built her dream home in 2012, complete with a library and plenty of room for all the grandchildren.
As a new teacher she worked during the summer as a salesperson at a local department store. It was there that she helped a struggling young dad find a swimsuit for his five year old daughter. Little did she know, she would become that man’s wife and that little girl’s mother.

Sylvia was a loving and devoted wife to George for almost 36 years. Through her Christian influence, she led him to know Jesus as his Lord and Savior. Over the years she continued to support and encourage his spiritual growth. She was his light in the dark times and his companion in the illuminated ones. His loss is palpable.

Sylvia had many gifts- singing, cooking, being tech savvy- but being a wife, mother and grandmother is where she shined the brightest. Her family was the joy of her soul. She knew the value of quality time and was eager to spend it with loved ones. Arts and crafts, board games, cooking lessons… it was always a good time at Grandma’s house. The bigger the mess or chaos, the sweeter the memory!

Sylvia was a progressive thinker with a unique perspective. Her view and input will be missed. She was a leader, an encourager, a positive influence and a force to be reckoned with. She was generous and kind. And salty when she needed to be. We are thankful that, for a time, she was ours.

Sylvia was preceded in death by her parents and her sister, Sherry Delores Newsom. Serving as honorary pallbearers were her nephews.