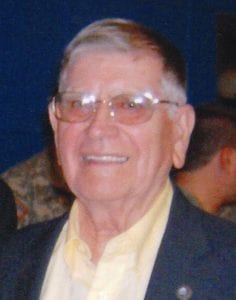 Mr. Breeland was a member and Master Mason of the Masonic Lodge #392, Tylertown, MS for 60 years. He was a past Post Commander of the V.F.W. Post #5099, a member of the D.A.V. Association; the Air Force Sergents Association and was one of the first members of the Bossier Parish Sheriff’s Department Posse and retired from the Benton Volunteer Fire Department. He also formerly volunteered for the American Red Cross at Barksdale Air Force Base.

Mr. Breeland was a very active member of the Pilgrim Home Baptist Church where he was a Deacon and actively held many committee positions with the church before his illness.

He was preceded in death by his father and mother, Clyde B. Breeland and Vera Brumfield Breeland; daughter, Tracy B. Johnson; brothers, Louis Breeland and Wilkie Breeland.

He is survived by his wife of 34 years, Susan Foster Breeland; daughters, Claudia J. Colton, Janice M. Breeland; step-daughter, Jamie Persac; ten grandchildren; seven great-grandchildren; and sister, Ellen Bounds of Pearl, MS. He also is survived by many nieces, nephews, and cousins to whom he was very close.