V. Eileen Earl, 95 of Van Buren passed away Friday, October 9, 2015 in a local nursing home. She was a homemaker. The family wishes to express their appreciation to Peachtree Hospice and Crawford County Healthcare and Rehabilitation Center for their help. She was preceded in death by her husband, Louie Alvin Earl. 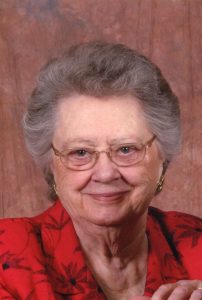 Funeral service will be at 2 PM Monday, October 12, 2015 at Ocker Memorial Chapel in Van Buren with burial at Woodlawn Memorial Park in Fort Smith under the direction of Ocker Funeral Home in Van Buren.

The family will visit with relatives and friends Sunday, October 11, 2015 from 2-4 PM at Ocker Funeral Home 700 Jefferson Street, Van Buren.