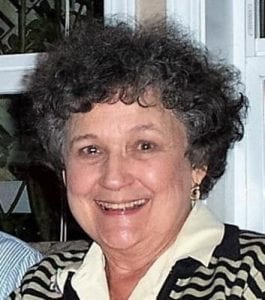 BENTON, LA – Margaret Virginia Arnold Singletary Hebert went to be with her Lord and Savior Jesus Christ on February 6, 2016. Known for her kind, gentle spirit and willingness to serve others, Virginia was loved by all who knew her, and was affectionately known as “Mo” by her descendants. She was the happiest when spending time with family or at church, and she enjoyed sewing, gardening, reading and watching old movies.

Virginia was born in Baton Rouge, LA on June 21, 1928, to Hiram and Louise Arnold. In 1947, while a sophomore at LSU, she met and married Clyde Cecil Singletary. In 1951, following studying at Purdue while Clyde completed his Ph.D. there, Virginia received her B.S. degree at Kansas State University where Clyde was a professor. She did graduate work at Texas A&M and Mississippi State University. Virginia and Clyde had four daughters, each born in a different university town. In 1961 they moved to Starkville, MS, where she was an active member of the First Baptist Church and kept the nursery for about 30 years. She also taught home economics at Henderson Junior High for 15 years. Upon retirement, she and Clyde moved to Diamondhead, MS. In 1996, her husband preceded her in death after 49 years of marriage.

In 1997, Virginia married Jimmy Hebert and they moved to Benton, Louisiana. During their almost 19 years of marriage, they experienced much joy in establishing a new home, a new church family, meeting both new and old friends, traveling to 15 different countries, and loving their little rescue dog, Sonny.

Virginia was preceded in death by her parents, her brother, John Thomas (J.T.) Arnold; and her sisters, Evelyn Morgan and Gaynell Lear.

The funeral will be held at 11 am on Saturday, February 13th at Cypress Baptist Church Benton, LA, with visitation starting at 10:00am at the church. A graveside service will be at 3 pm at the Mansfield Cemetery in Mansfield, LA. Memorials may be made to Cypress Baptist Church, or to a charity of your choice .