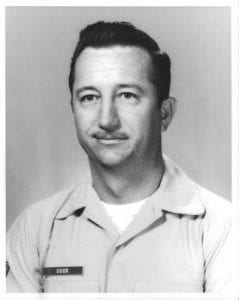 Mr. Cook, 78, passed away Friday December 25, 2015 with his wife and sons beside him. He leaves to cherish his memories, his wife of 60 years, Virginia Dale Chevalier Cook, two sons, Walter Lee Cook, Jr. of Haughton, LA, and John Gregory Cook of Kemah, TX. Dedication to his family was first in his life. He was born August 4, 1937 in Kings Mountain, North Carolina to the late John W. Cook and Mary E. Roberts. A retired Master Sergeant of the USAF loved airplanes from the age of 17. Enlisting in the Air Force, he quickly rose to supervisory roles, running the engine shop at Barksdale and then flying on 86 aerial refueling combat missions over Vietnam from Korat, Thailand as Crew Chief of a KC-135 with 145 on time take offs with no mechanical aborts, and then as Line Chief of F-105 Wild Weasels in Korat and Takhli, Thailand.

His new commander hand-picked him from records at Washington D.C. for Flight test at Edwards Air Force Base, where he received the first FB-111A as Crew Chief and later the B-1A. He then worked at AT&T for 23 years, and retired a second time.

In his well-deserved retirement hobby, he owned a Cessna 150, a Luscombe 8A, an Aeronca Champ and then a Remos GX. He flew out of his hanger at Shreveport Downtown airport until he lost his vision and was blind in 2013. He was an art patron of the Bossier Arts Council and Creative Connection beginning in the 1970’s.

The family would like to express their heart-felt gratitude for the care he received at Promise Hospital by the doctors and medical staff. Also to his good friends C.C. Chamberlain, Stan and Julia Kolniac, Shirley Koval, and Leo and Zaiga Sears.