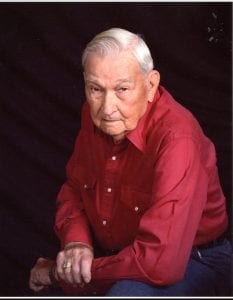 Mr. Van De Weghe was born on July 20, 1925 to Thomas Franklin and Clara Etta Stevens Van De Weghe in Bradley, AR and passed away on Tuesday, January 10, 2017 at his home in Plain Dealing, LA.  He was a former resident of Gardena, CA for 50 years and had made his home in Plain Dealing since 1998. He was a faithful member of the Plain Dealing Baptist Church and was the former owner of the Ellis & Vans’ Fdry, Inc.  He was a veteran of World War II serving in the U. S. Army and was a past Master Mason of the Downey Masonic Temple #220 F&AM, Downey, CA and a member of the Plain Dealing Masonic Lodge #237 F&AM. He enjoyed riding horses, hunting and fishing and was an avid out doors man. He was active in many civic and community affairs and will be remembered as a loving husband and father.

He is survived by the love of his life, his wife of  73 years,  Ione  Rich Van De Weghe  and a daughter, Maria Van De Weghe, all of Plain Dealing, LA.  He is also survived by a number of nieces and nephews and his beloved pet Schnauzer, Angel.

Mr. Van De Weghe was preceded in death by his parents and brothers, B. C., Tommy and Jewel.