FORT WORTH, TX – Winifred Pearce Groves aka Patty Groves, 86, gained her angel wings Wednesday, February 15, 2017 at 5:12pm with family by her side.

Born in Newcastle Upon Tyne, England, in 1931, Patty later had two daughters, before moving to the United States and giving birth to her third daughter. In England, Patty served in the Women’s Land Army and worked at a toffee factory.

After moving to the United States, she lost contact with her younger brother Fred. In 1997, after 40+ years, she was reunited with her brother, at DFW Airport. Patty enjoyed catching up with him in the years after their reunion. She even traveled to England to see her brother’s family in 1998. In 2000, she returned again for another visit. 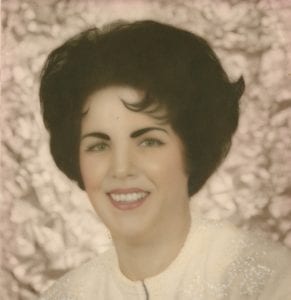 Patty remained in Bossier City, Louisiana throughout her life until December 2016, when she moved to Texas due to her declining health. The majority of her days in Texas were spent at Huguley Hospital in Fort Worth. A special thank you to the third floor PCU nurses and staff from the family for the exceptional care Patty received.

Her favorite color was purple and she loved watching old movies all night long. In her younger years, she enjoyed crabbing at Pleasure Island in Port Arthur, Texas. Patty enjoyed “tea time” which consisted of drinking her coffee and eating chocolate. She always had a collection of chocolate in the refrigerator. Patty had a love for anything sweet. As much as she loved chocolate, which was A LOT, she was loved by her family even more. Patty was lovingly known as Mama, Memaw and Mema depending on who was speaking of her.

Patty was preceded in death by her late parents, sister, and daughter, Sharon Robinson.