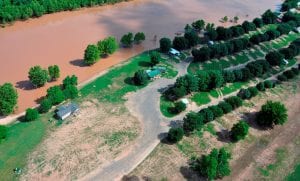 This just in from the Bossier Sheriff’s Office:

Bossier Sheriff Julian Whittington met with Bossier City Mayor Lo Walker and Bossier Parish Police Jury officials Monday afternoon at the Bossier Office of Homeland Security and Emergency Preparedness to monitor the rising Red River, which is expected to crest later this week around 28.5 feet.
Forecasters with the National Weather Service briefed the Bossier officials that the Red River is currently at 22.6 feet and is expected to crest at 28.5 feet on or around Dec. 3. This will be nearly double the river’s normal level, but this anticipated crest will be short of the 30 foot flood stage for the Red River in our area. The crest will also be well below the historical crest of just more than 37 feet we experienced on June 9.
NWS noted that significant rainfall in the southeast Oklahoma area has caused the rise in the Red River’s levels; the Red flows from there along the Oklahoma/Texas border, then along the north side of Texarkana into Arkansas and south to our area. The Red ultimately meets the Atchafalaya River in east central Louisiana not far from the Mississippi River.
Bossier officials will continue to monitor the conditions and will update further if anything changes. As a precautionary measure, parish and city officials are making sandbags available for public pickup Monday-Friday from 7 a.m. to 3 p.m. at these two locations: Bossier Parish Highway Department Maintenance Barn at 410 Mayfield St. in Benton and the Bossier City Public Service Complex at 3223 Old Shed Rd.
The Red River Waterway Commission had previously closed the public boat launches for the Red River. Without any significant rainfall, the NWS advises that the river should remain elevated around 24 feet through the end of year.