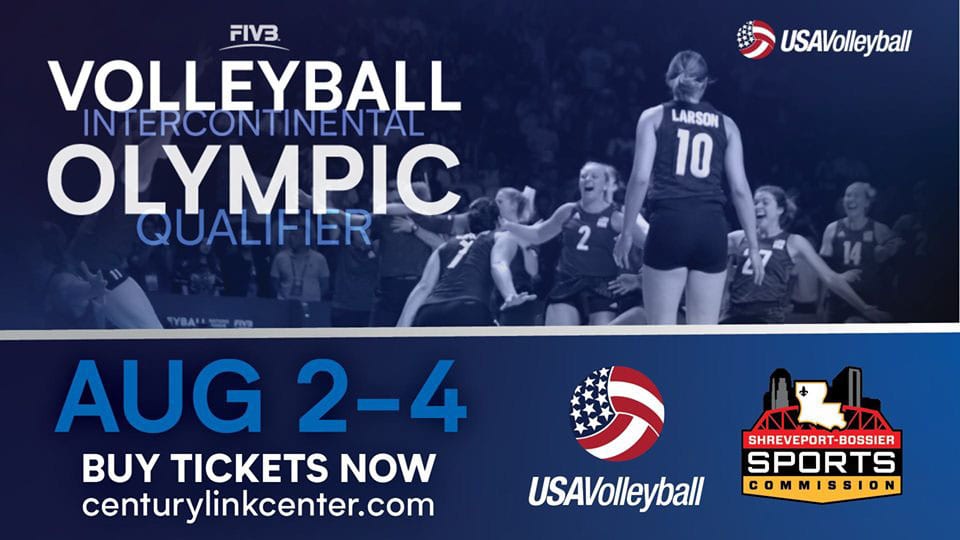 Airline head volleyball coach Regina Digilormo has seen the sport grow by leaps and bounds in Northwest Louisiana in the last few years.

While the sport has long been popular in South Louisiana, Airline was the first team in Bossier Parish to field a varsity program in 2014.

Now Haughton, Parkway and Benton also have teams. There are also several club teams in the area. Centenary College also has a team.

The sport will take center stage this weekend when the United States and three other teams compete for a spot in the 2020 Summer Olympics in the International Volleyball Federation (FIVB) Intercontinental Olympic Qualification Tournament Friday through Sunday at the CenturyLink Center.

Digilormo couldn’t be more excited about having an event of this magnitude here.

“Our entire community has an incredible opportunity to see some of America’s finest athletes compete to qualify for the Olympic Games in Tokyo,” she said in an e-mail message. “This very team that we get to see play right down the road has medaled in the past three Olympic Games.

“If you’re a fan of athletics, not just volleyball, you don’t want to miss this. If your child aspires to represent the red, white, and blue one day, they have the chance to see the passion and perseverance it takes to perform at a high level exemplified in this women’s team.

“As a volleyball coach and a fan of athletics in general at all levels, I am throughly excited that I get to see these games. Every coach dreams of the chance to take their team to see this caliber of play live. It is going to be an incredible experience.”

Ranked No. 3 in the world and coming off two major victories, the U.S. team will be favored. The U.S. is a combined 41-1 all-time against the tournament’s three other teams — Kazakhstan, Bulgaria and Argentina.
But in a story on USA Volleyball’s website, U.S. head coach Karch Kiraly said the team doesn’t expect a cakewalk.

“It truly is a privilege and an honor to be playing for an Olympic berth inside our own country, so we’re super-pumped to play in Shreveport,” he told the website. “We are not taking anything for granted, or thinking that any opponent is less of a threat than others.

“Instead, we’re focusing all of our efforts into winning the first point of the tournament. Then we’ll reset, and focus on the next point. We are treating each of our three opponents with the utmost respect – Kazakhstan, Bulgaria and Argentina.”

Kiraly, should be familiar to area Olympics fans. He is the only person to have won gold medals in beach volleyball (1996) and indoor volleyball (1984 and 1988).

He became head coach of the women’s national team in 2012. Kiraly guided the U.S. to the FIVB World Championship in 2014 and a bronze medal in the 2016 Rio de Janeiro Olympics.

On Saturday, the U.S. plays Bulgaria at 5 and Kazakhstan meets Argentina at 8.

On Sunday, in a match that could decide the champion, the U.S. faces Argentina at 1.

The match will be televised live on NBC. Kazakhstan plays Bulgaria in the event’s final match at 4.

The team with the most wins qualifies for the Olympics. If there is a tie, the first tiebreaker is based on sets won per match, although to receive a point a team must win two sets.

The U.S. is coming off two big tournament victories — the Pan American Cup and the Volleyball Nations League.

The U.S. swept the Dominican Republic in the championship game of the Pan American Cup in Peru.

In the VNL final, the U.S. rallied from two sets down to defeat Brazil. The U.S. went 16-3 in the event.

The VNL tournament, in its second year, featured 16 teams and was held over a period of six weeks from May through July in various locations around the world. The finals were in Nanjing, China.

This weekend’s Olympic qualifier is one of six that will decide the 12 teams that will compete in Tokyo. There are also five Continental qualifying tournaments. Host Japan automatically qualifies.

The U.S. team will have 14 players — four outside hitters, four middles, two opposites, two setters and two liberos. They hail from seven states.

None are from Louisiana, but middle Chiaka Ogbogu’s is from Coppell, a suburb of Dallas-Fort Worth.

According to a story on the USA Volleyball website, Ogbogu expects a lot of family and friends to make the 3-hour drive to see her play.

She said she has never been here, but her boyfriend attended Centenary as a freshman.

The former University of Texas star is in her second year with the national team. She’s looking forward to helping the U.S. get to Tokyo.

“I think I’m just going to have an immense sense of pride, not only working for a bid for Tokyo, but being able to do that in our home country is so special,” she said about playing in Bossier City.

“I’m just glad an American city won the bid for this tournament and I’m just excited to get out there and be in front of friends and family and just play hard for that bid.”