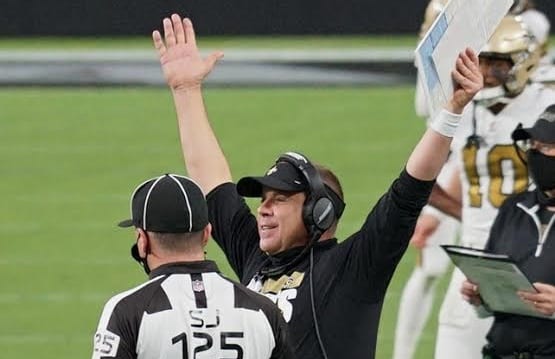 The NFL is well underway in spite of COVID-19 but Ark-La-Tex football fans might just be ready for a do-over as the New Orleans Saints and Dallas Cowboys find themselves mired in mediocrity with a 1-1 start to the season.

After basting Tom Brady and the Tampa Bay Buccaneers in their season opener, the Saints appeared hapless after a stellar start in Las Vegas as the Raiders rallied with 24 straight to outscore the pre-season NFC Super Bowl favorites 27-7 down the stretch and christen Allegiant Stadium with a 34-24 win on Monday night.

After going 18-of-30 for 160 yards and two touchdowns in Week 1, Brees looked rather pedestrian in Week 2, despite going 26-of-38 for 312 with a score and a pick, without All-Pro wide receiver Michael Thomas, who is currently out with a high ankle sprain suffered during the season opener.

Most of Brees’ statistical improvement came courtesy of trash yardage late in the game with the Raiders playing prevent.

The NFL’s all-time everything, including the record for most passing attempts broken a week earlier, assured media after the game that his less-than-stellar performance, which included atypical passing inaccuracy due perhaps to a lack of preseason, is not a sign of decline or things to come.

“Well, my job is to execute the offense … my job’s not to have the most air yards or throw the ball down the field most or anything like that,” bristled the 41-year-old after the Monday night loss on ESPN.

“I think I’ve always evaluated myself on being a great decision-maker. And so, at the end of the day, I’ll throw the ball to the open guy, move the ball down the field, score points, help us win football games.

With fellow NFC championship contender Green Bay (2-0) rolling into the Mercedes-Benz Superdome on Sunday evening, the Saints could find themselves on a two-game slide and a losing record to close the month of September.

And considering the much-coveted home-field advantage throughout the playoffs is always a priority, every game counts in what is clearly a wide-open conference.

Thanks to a video game-like performance from Dak Prescott in a literal last-second victory (40-39) over the Atlanta Falcons in front of a limited 21,708 at AT&T Stadium, Dallas should move on from a Week 1 loss which could be seen as a frustrating continuation of last year’s late-season collapse in which they lost four of their final six games.

The Cowboys, who were absolute busts in 2019 after failing to make the playoffs thanks in large part to the disastrous 8-8 finish, are once again batting .500 with a 1-1 record, which could easily be 0-2 if not for kicker Greg Zuerlein’s 46-yard game-winning field goal and the self-destructive nature of Atlanta, which had led throughout the entire game.

In fact, Sunday’s come-from-behind win had more to do with the Falcons losing the game rather than an outright Dallas victory.

Not even a long-overdue coaching change has made much difference with the uninspired play of the Cowboys keeping “America’s Team” languishing in the status quo.

Franchise quarterback Dak Prescott, so labeled after the team placed the designation on the former Haughton Buccaneer following a lengthy and much-maligned contract negotiation that has yet to create any long-term commitment or goodwill.

Tack that with yet another season-altering injury to promising third-year linebacker Leighton Vander Esch, who is out for six to eight weeks due to a broken collarbone after missing the final seven games last year due to a neck injury, and the once-dominant NFL dynasty appears to be headed for another year of heartbreak in the team’s ultimate bid to once again hoist the Lombardi Trophy — a feat not accomplished since the Cowboys’ last glory days of the 1990s.

The 27-year-old showed great poise in rallying his team from a 20-point deficit by going 34 of 47 passes for 450 yards with a passing touchdown and three rushing touchdowns.

Prescott’s record-breaking heroics as the only man in NFL history to pass for as many yards and rush for three scores in a single game earned him the NFC Offensive Player of the Week honors for the third time in his five-year career.

“He has great patience and discipline, and he’s resilient,” said Cowboys first-year head coach McCarthy, who has tutored the likes of Joe Montana, Brett Favre and Aaron Rodgers throughout his expansive career.

“Dak is wired perfectly for those types of situations.”

Like the Saints, the Cowboys’ season does not get any easier in the near future with a road game scheduled against the undefeated Seattle Seahawks.

But with arguably the league’s best receiving corps, Prescott gives Dallas a fighting chance of finishing the month on a winning note.

Whether it’s Brees-Aaron Rodgers or Prescott-Russell Wilson, Week 3 could serve as a glimpse into the future of who might square off against the AFC champion come February.