From Google Chromebooks and classroom clicker response systems to iPads and software for non-English speaking children, the Optimist Club of Bossier funded $27,000 in classroom technology Wednesday as part of its annual teacher grant program.

The Optimist Club grant ceremony is one of the most highly anticipated events at the end of the school year for Bossier Parish teachers. Out of 29 grants submitted, 11 were chosen that will impact more than 1,400 students when they return for the 2014-15 school year.

For 23 years the Optimist Club has awarded grants to Bossier teachers, totaling $372,000 for classroom enhancements that may not otherwise have been funded without the organization’s assistance.

“I know those dollars represent 372,000 tears of joy,” Podner told teachers at the awards ceremony.

The teachers winning grants were Shuntay Wilson, from Kerr Elementary. She received $3,000 to purchase computer equipment and a Studies Weekly subscription to address literacy. Justin Steele, T.O. Rusheon Middle, who was awarded nearly $3,000 to buy Chromebooks.

“It’s completely changed the way I teach and has enabled us to go paperless,” Steele explained.

He won an Optimist grant last year that enabled him to buy tablets for his classroom. After seeing the difference they made, Chromebooks will be expanded for use in the Social Studies department mobile learning lab.

“Your generosity has catapulted this program to a whole different level,” Bohl told Optimists.

Tanya Boggs, Benton Middle School, will be able to purchase a Promethean ActiVote System, thanks to the $1,800 she was given. Boggs explained that children are sometimes hesitant to answer questions aloud in class. The clicker response system will enable all children to answer anonymously and the answers be projected on a screen, giving Boggs insight into who needs additional help with the lesson.

Robyn Jacobs, Legacy Elementary, was awarded $2,448 for a classroom set of clickers and software to engage students in the learning process, provide immediate feedback and serve as an assessment tool. Jacobs can then differentiate instruction and reinforce skills in a smaller group setting for those students in need of a more in-depth explanation. And Charlene Cooper, T.O. Rusheon Middle, received $2,400 to purchase classroom equipment that will allow students to analyze the science behind sounds, frequencies and decibels.

“You can see why we have excellence in our classrooms,” commented Bossier Schools Superintendent D.C. Machen. “These are the educators who make a difference everyday.”

Before the school year ended, more than 70 Bossier Parish students were already on the road to Knoxville, Tenn. — not for vacation, but to represent Louisiana at the 2014 Destination Imagination Global Finals.

The state champion team members from Bossier Parish came from Airline, Bellaire, Cope, Curtis, Elm Grove Middle, Haughton High, Legacy and Parkway. Upon arrival at the DI Global Finals, the world was their stage, competing against peers from countries around — well, the globe. 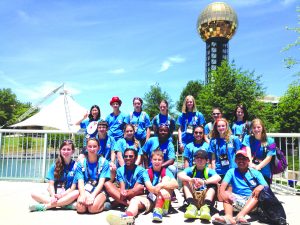 Teams were tasked with coming up with innovative solutions to challenges involving engineering, science, structure, drama, improvisation and community service.

Parkway High School knocked it out of the ball park, placing first in the Instant Challenge and being named the sixth place overall winner in the 2014 DI Global Finals High School Level Community Service challenge.

Joan Turek, Parkway’s Team Manager, said “They were recognized for their first place win in Instant Challenge by getting to go on stage and receive medals in front of the awards ceremony crowd of about 18,000. It was pretty exciting for all of us and the first time a Louisiana team has ever been on stage!”

The end of the school year could not have been any better for Glenn Sullivan, who teaches at Louisiana New Tech at Plain Dealing.

On the second to last day of school, representatives from CenturyLink Corporation made a surprise visit to Sullivan’s science lab. In their hands was a check from the CenturyLink Clarke M. Williams Foundation for $4,947 to fund Project IMPACT: Increasing Motivation, Participation and Academics with Curricular Technology.

Sullivan said the grant award will be used to purchase Google Chromebooks, allowing students to enter the world of cloud computing. The Chromebooks will enable his students to access and share project data from their work stations instead of going to a computer lab.

“The change to the Common Core curriculum means students need to spend more time analyzing information and data and less time just memorizing information from a textbook,” explained Sullivan. “By making the student an active researcher instead of just a passive note taker, they are more actively engaged in the learning process. This is the basis behind the change to the Common Core curriculum and Problem-Based Learning.”

As part of Project IMPACT, Sullivan envisions improved student achievement in science and developing strong problem solving skills. These objectives will be achieved through the integration of on-line access of various application technologies into the science classroom curriculum.

“In Problem-Based Learning, the objective is to present a ‘problem’ to the student or student team. They then research the problem, learn what it takes to solve the problem, then develop a solution to the problem, all the while sharing information with each other,” Sullivan said. “They then present the solution to the teaching staff. This is the way businesses work out problems and it is the way students need to be taught early how to in school. In a standard classroom setting this system is seldom used except in science fair projects.”

The 2014-15 school year will be off to a fast and exciting start in Sullivan’s classroom, where students will be engaged and learning will come alive at their fingertips.

First graders at W.T. Lewis have been “reading machines” this past school year.

Teacher Stacey Robinson said “I have taught first grade for 15 years now and I have never seen so many kids reading so many books!”

Robinson shared that in their first grade class, 16 children accrued over 100 points in the Accelerated reading Program. That is over 200 books read per student and tested on. That is only in three nine-week periods, too. W.T. Lewis also had a student with more than 200 points/400 books and one student with 642 points.

Before the summer began, each student was awarded a trophy and prizes.

Boasting 220 points is Brooklyn Klutz and the student with the most AR points is Bridget Dillow, who managed to accrue 642 points.