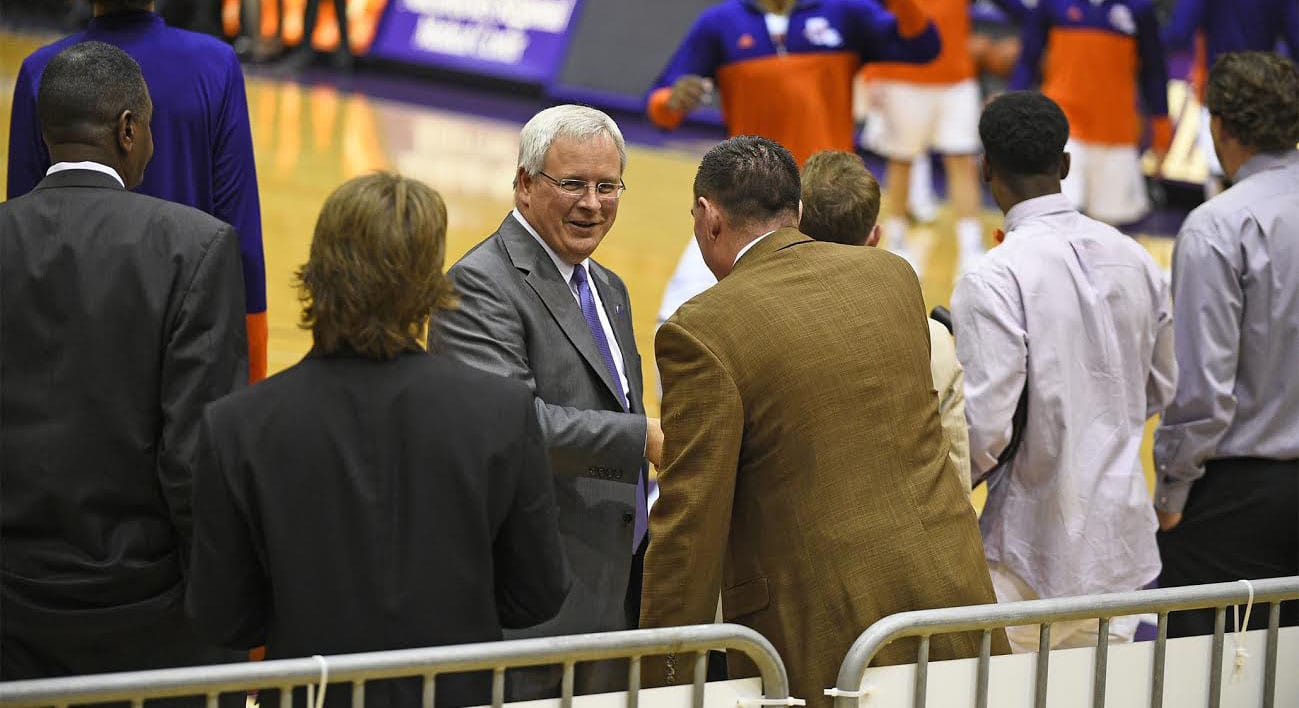 NATCHITOCHES — Northwestern State University president Jim Henderson, a staunch supporter of athletics, can usually be heard from anywhere in NSU’s venues voicing his delight for the Demons or his opinions on officiating.

For NSU men’s basketball’s Dec. 17 tilt with ULM in the Shreveport-Bossier Holiday Classic in Bossier City’s CenturyLink Center, the outgoing NSU president will be much closer to the action.

Henderson will be an honorary coach, invited to sit on the bench with NSU coach Mike McConathy and the Demons for the 4:30 game.

Tickets can be purchased through NSU until Monday. Fans can sit courtside for $50, in the reserved section for $25 or in general admission for $15. One ticket admits a fan for all three games of the basketball classic, which begins with Centenary-Millsaps at 2 p.m. and ends with Grambling-Louisiana Tech at 7 p.m.

Tickets can be purchased at nsutickets.com or by calling the NSU ticket office at 318-357-4268. All tickets bought through NSU will directly benefit Demon athletics.

“Dr. Henderson has been such a great supporter of the men’s basketball program and all of NSU athletics,” McConathy said. “The passion he displays at our games comes from his heart, and it sets a great tone for everybody in our fan base.

“What he’s done for our university is just remarkable so making him honorary coach seems a perfect way for our program, on behalf of everybody in the NSU family, to show our admiration and appreciation. I might even pick up some tips about how to work the officials.”

Henderson was selected to be the University of Louisiana System President in early October, and he will officially begin that post Jan. 1.

In his two years as president of his alma mater, Henderson has injected energy into the Natchitoches campus.

NSU’s fall enrollment of 9,819 is its highest since 2005. Enrollment increase has been a key part of Henderson’s strategy as NSU strives to become “the nation’s premiere regional institution of higher education.”

Among the many milestones reached in Henderson’s tenure include a cooperative endeavor agreement with the Louisiana Department of Economic Development to develop a trained workforce for CSC, a global leader of next-generation technology services located in Bossier City.

Henderson has deep ties to the Shreveport-Bossier area. His late father Clem was a revered high school coach and principal at Fair Park, winning a state basketball championship in 1964.

As Bossier Parish Community College’s chancellor from 2009-14, Dr. Henderson oversaw an enrollment increase of more than 84 percent while annual certificate and degree completions increase by 90 percent.

Henderson’s middle child Nicholas helped Shreveport’s Loyola Prep to one of its best football seasons in recent history this fall as the Flyers went 9-2 and were the No. 2 seed in Division II.