Bossier City artist Chris Opp is at it again.

Opp has taken on a project that will bring the mighty mustang at Greenacres Middle School to life. The 24″x48″ project can easily be seen from Bossier’s busiest roadway, Airline Drive, and is  coming together with each brush stroke.

The existing mural was covered with primer June 24 and Opp has worked daily on the piece, adding layer upon layer of paint to the white-washed wall. A twist to this project is that the community will actually have a chance to paint a portion of Opp’s mural.

Donations of $100 can be made to paint an eight inch white star on the American flag. Proceeds will go to Warrior Horse, a non-profit organization that helps military veterans who suffer from Post-Traumatic Stress Disorder (PTSD) through a personalized, interactive equine-assisted program.

Warrior Horse was an idea Kevin Russell had three years ago. It wasn’t until recently that those ideas were put into action.

“We’re just getting started,” Russell said excitedly. “This program is going to change the lives of many people. Not only will it help our veterans, but everyone they come in contact with.”

Warrior Horse offers a three day program during various times of the year. Five military veterans will be served at a time, where they will be instructed in communicating with the horses and how the program works. The instructor will teach the veterans basic skills required to maintain their own safety as well as for the horses. Some non-verbal communication techniques will also be taught to help the veterans learn the horses‘ language.  Veterans will have one-on-one time with their horse, which will help establish a bond between them.

The ultimate goal of this unique interaction is to transform the veteran by relieving stress and producing a catalyst for change within them.

All of the horses used by Warrior Horse are retired thoroughbreds. One horse in particular is the inspiration behind Opp’s mural.

Blue, a female thoroughbred, was the first horse Russell ever owned. His wife, Teresa, bought her at an auction 12 years ago. Russell felt a connection with Blue.

Sadly, the horse was put down only a few months ago after she was diagnosed with cancer.

“She was very respectful and thoughtful,” Russell said as tears welled up in his eyes. “She was a great companion and a teacher.”

Knowing that his horse will be part of this project is bittersweet. He couldn’t think of a more fitting way to honor ol’ Blue.

“She was the horse that started it all,” Russell said. “If you didn’t know the story behind it, you would just see colors on a wall. The more people know about this program, the more lives we will save by what we’re doing.” 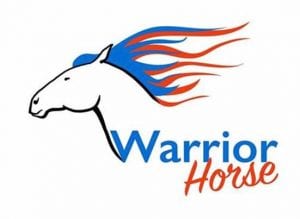 Warrior Horse is heavily dependent on public donations. Russell said it costs approximately $2,500 per veteran to go through their program each month.

As of June 27, Opp said 18 of the 50 stars had been purchased. Anyone who would like to paint a star can simply show up at Greenacres Middle School with their $100 donation Friday, July 1, through Sunday, July 3.

The finished mural will be unveiled Monday, July 4. Opp said merchandise will be on sale at the unveiling. All proceeds from those sales will also go to Warrior Horse.