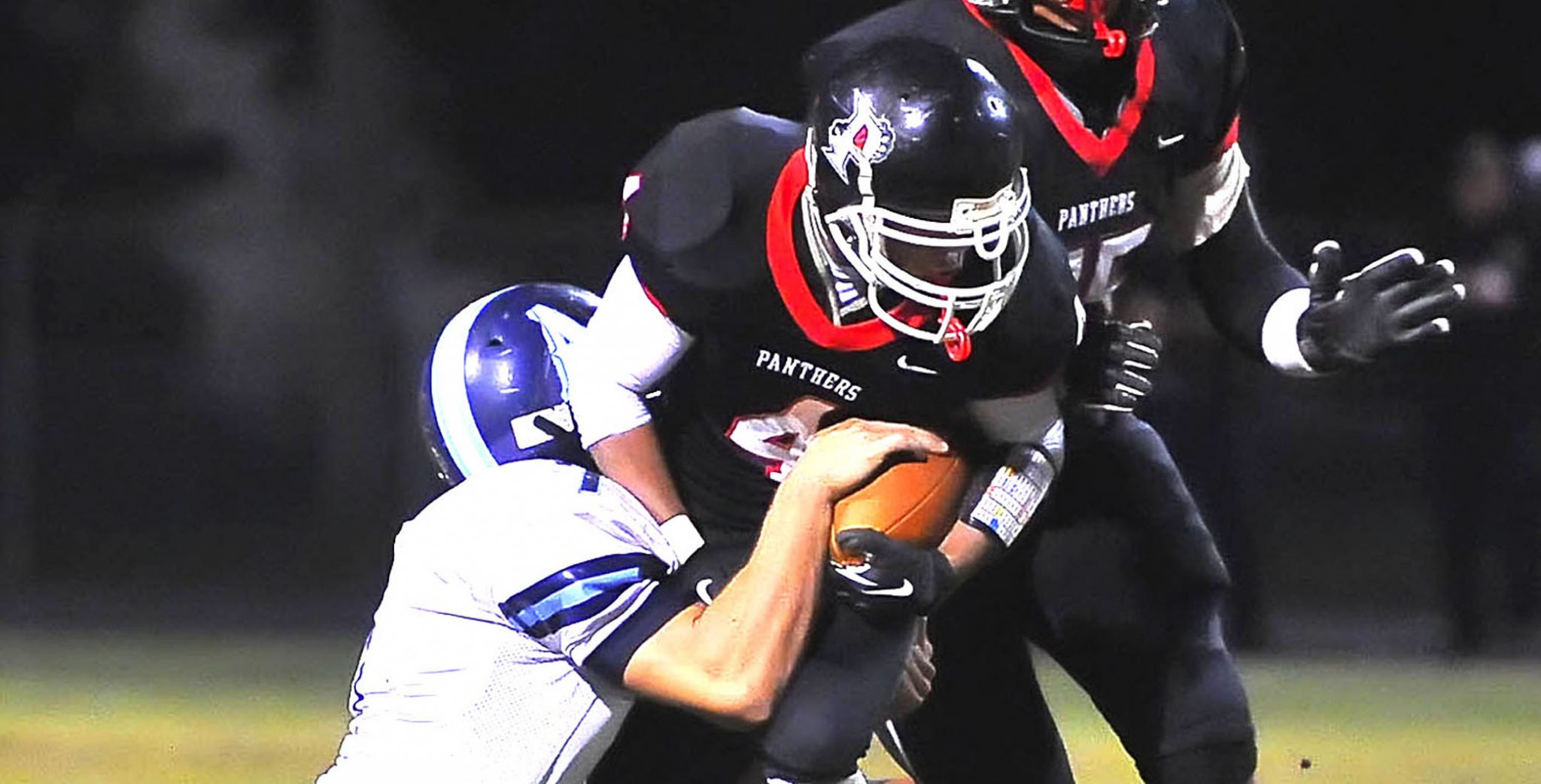 It started out like it was going to be a Parkway cakewalk. It ended with fans of both the Panthers and the Airline Vikings on their feet at Preston Crownover Stadium, urging their respective teams on.

Parkway’s undefeated season and a possible outright District 1-5A championship hung in the balance.

The Panthers had jumped out to a quick 14-0 lead in the first quarter. But after that it was a toe-to-toe battle for Bossier City high school football supremacy.

Players from both teams put it all on the line for four quarters. For a while in the fourth, the momentum was with Airline and an upset seemed possible.

With the score tied at 23, the Vikings stopped the Panthers on a fourth-and-3. Airline took over at the Parkway 46 and moved to the 27.

On third-and-6, the Vikings came tantalizing close to completing a pass inside the 10. On fourth down, a 40-yard field goal attempt failed.

It’s in these moments that big-time players make their presence felt. Parkway has two of the best in senior quarterback Brandon Harris and senior wide receiver Brodrick Jefferson.

On third-and-10, Jefferson caught a pass from Harris, escaped a tackle and got a first down. A play later he ran 53 yards up the middle for an apparent touchdown that was erased by a penalty.

Harris then broke loose to the Airline 22. On third- and-8 from the 20, he lofted a pass to the end zone. Jefferson went up and got it for the go-ahead score with 1:39 left.

It wasn’t over until the Panthers recovered a fumble near midfield that allowed them to run out the clock.

With the 30-23 victory, Parkway finished the regular season 9-0, the first undefeated season in school history. The Panthers won the outright District 1-5A title at 5-0. Airline, which could have earned a share of the title with a victory, finished 5-5 overall and 3-2 in district.

“It’s an amazing feeling,” Parkway coach David Feaster said. “This is something that we’re going to have some perspective probably more as we grow and look back on it. But to have a perfect season like this, and to be in 5A when we have our perfect season.

“It would’ve been one thing if we had gone back down to 4A, and beaten those guys and so forth. But to be in 5A, the largest classification, and have our kids play this well every week, is amazing.”

Airline coach Bo Meeks was obviously disappointed in the loss, but he couldn’t have gotten a better effort from his players.

He told his team after the game that they had become a “great football team.”

“I could not be prouder of the effort of our guys tonight,” he said. “To fight back after being 14 down and being on the verge of winning against a team that everyone is talking about going to the Superdome. We were 2-4 and left for dead after Week 6. It’s just a testament to what these assistant coaches and players have done.”

The Vikings put pressure on LSU signee Harris throughout the game, forcing him into some poor throws in the first half.

But Harris still accounted for almost 400 yards total offense. He completed 14 of 29 passes for 307 yards and three touchdowns. He also rushed 15 times for 90 yards.

Jefferson, who grabbed seven passes for 222 yards, caught an 87-yard touchdown pass on Parkway’s second series. Austin Roth was on the receiving end of a 17-yard score on the Panthers’ first drive.

Avery Shoebridge kicked a 22-yard field goal with 3 seconds left in the half to give the Panthers a 17-15 lead. Demetrius McAtee also scored on a 1-yard run. William McKnight had a big catch that set up a touchdown.

Walker had 15 tackles, one sack and a forced fumble. Williams had 12 tackles and an interception.

King ended a promising Airline drive with an interception and had 13 tackles. Harper had four tackles for losses and recovered a fumble.

Zac Scroggins also helped the cause with eight tackles.

In his post-game speech, Meeks told junior quarterback Jacob James that he turned in a “warrior’s effort.”

James scored touchdowns on runs of 17 and 6 yards. He also completed 18 of 26 passes for 190 yards and a touchdown with two interceptions.

James also had a two-point conversion run after his first TD, a 17-yard run.

He hit Charlie Matthews on a 7-yard swing pass for a touchdown. Matthews is a defensive lineman who came in and lined up in the slot.

Shuncee Thomas also had a big game, gaining 114 yards on 18 carries. A lot of the credit for that goes to Airline’s offensive line.

As emotional as the game was, both the Panthers and Vikings will have to put it behind them quickly and get ready for the playoffs