Emilie Gibson’s fight against childhood cancer is far from over.

Her parents, Trey and Candi Gibson, are keeping her memory alive through a new foundation aimed at raising awareness and supporting research, institutions/organizations, families, and initiatives. Plans for the Fight Like Emilie Foundation were formally announced on June 15, which would have been Emilie’s 11th birthday.

“This is our gift to her,” Trey said. “We’re ready and excited about it.”

Emilie was diagnosed with DIPG (Diffuse Intrinsic Pontine Gliomas), a deadly brain tumor, in September 2016. DIPG is the most common brainstem tumors in children, representing approximately 75-80% of all pediatric brainstem tumors.

Unfortunately, fewer than 10% of children with DIPG survive two years from diagnosis.

“We knew the prognosis from the very beginning,” Trey said. “Emilie was a fighter. She came into this world a fighter. She has always been a tough girl and I loved her for it.”

Trey vividly remembers going to a doctors appointment last September and hearing the news that Emilie’s tumor was growing and not responding to treatments. Sadly, Emilie passed away Oct. 31, 2017 after a nearly 14 month battle.

“We’re still going through the grieving process,” Trey said, wiping tears from his face. “We are so blessed by the love and support we’ve gotten from so many people. It’s our turn to make a difference for the next child and their family.”

Brain tumors are now the most common cancer and cause of cancer-related death in children less than 15 years of age. Unlike many other pediatric cancers, there has been little progress in improving treatments and cure rates for DIPG over the last few decades.

That’s something the Gibsons want to see changed through the Fight Like Emilie Foundation.

“We’re on a mission to defeat childhood cancer,” Trey said. “Childhood cancer only receives four percent of government funding. Knowing how far away we are from a cure, it’s always been in the back of our minds to keep fighting.” 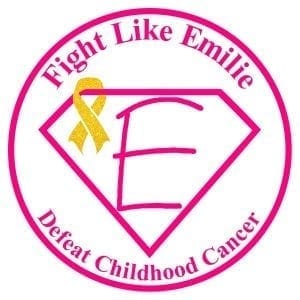 The foundation won’t be solely focused on DIPG, but for all childhood cancer.

Trey knows Emilie would be excited about their mission. Some of the things they want to do were actually her ideas, one of those being a childhood cancer float for Mardi Gras parades.

Being in a parade was on Emilie’s bucket list before she died. Thanks to some very generous people, she was able to ride in the Krewe of Highland parade last year.

The idea now is to create a float for children with cancer to give them the opportunity to ride in a parade just as Emilie did.

They also want to see improvements made in Shreveport-Bossier for other childhood cancer families.

“The resources for treatment are limited here,” Trey said. “We had to drive six hours to St. Jude. We flew to San Francisco every three weeks for six months. Then we had to go to Texas Children’s Hospital in Houston. One of our goals with the foundation is to make things better for the next families.”

The Gibsons are currently waiting on state and federal paperwork to be completed to get their foundation going. Once that happens, they will change their ‘Friends of Emilie Gibson’ Facebook page to the ‘Fight Like Emilie Foundation.’

Trey said there will be opportunities available in the future for the community to get involved in Emilie’s fight.

“We definitely want people to join us. This is a battle we can’t win alone,” he said.