Last year, one Bossier Parish tam — the Parkway Lady Panthers — made it to the FastPitch 56 State Softball Tournament in Sulphur.
Tuesday four parish teams, including Parkway, begin their quests for a trip to this year’s tournament as the playoffs get underway.
Parkway (11-15), the No. 31 seed in Class 5A, travels to Monroe for a 5:30 p.m. game against No. 2 Ouachita Parish (21-4). 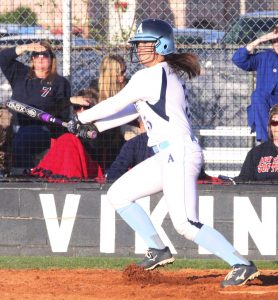 The Haughton Lady Bucs and Benton Lady Tigers host first-round games.
Haughton (17-10), the 13th seed in Class 5A, plays No. 20 St. Joseph’s Academy (18-8) at 4 p.m.
Benton (17-10), the No. 7 seed in Class 4A, faces No. 26 Franklinton (14-12) at 5 p.m.
Airline (15-11), the No. 21 seed in Class 5A, travels to Slidell for a 1 p.m. game against No. 12 Northshore (19-6).
If there is one team that shouldn’t be intimidated by anyone in the playoffs, it’s the Haughton Lady Bucs.
Haughton faced some of the top teams in the state this season. On March 28, the Lady Bucs defeated top-seeded St. Amant 6-4, the Lady Gators’ only loss to a team from Louisiana this season.
“I think the girls feel confident,” said Haughton first-year coach Leanne Shanks, who was an assistant for five years before taking over. “They know they can beat the high-caliber teams. It’s a good thing that that happened because it proves we can play with anybody.”
Shanks took over a veteran team with a lot of talent, so it’s no surprise the Lady Bucs have played well. But she said they have been inconsistent at times.
“We’d show up for one game and then the next game we wouldn’t play so well,” she said. “It was kind of back and forth there for a little while.
“We beat some tough teams so we know we’re capable of doing that. We’ve just got to be able to put it all together at the same time.  It’s seems like over the past few weeks we’ve hit our stride. We’re all kind of hitting together. I feel like we’re peaking at the right time.”
Airline put together a 10-game winning streak in the middle of the season. But the Lady Vikings’ bats went quiet after that, resulting in a mini-slump.
“Right now we seem to be getting the momentum back up again,” coach Lynn Roberts said. “The kids are starting to hit the ball again. I feel good about this game we’re going to play on Tuesday.”
From the information she’s been able to gather on Northshore, Roberts believes the her team matches up well with the Lady Panthers and has a very good chance to pull off an upset.
Benton takes an eight-game winning streak into the playoffs.
“I think we’re peaking at the right time,” Benton coach Michelle Owens said. “They are working really hard in practice. They sense this is the time they really need to step up.”
Owens said she is very pleased with the way seniors Alyssa Malone, Brittany Craig and Taylor Thompson have led by example with their work ethic.