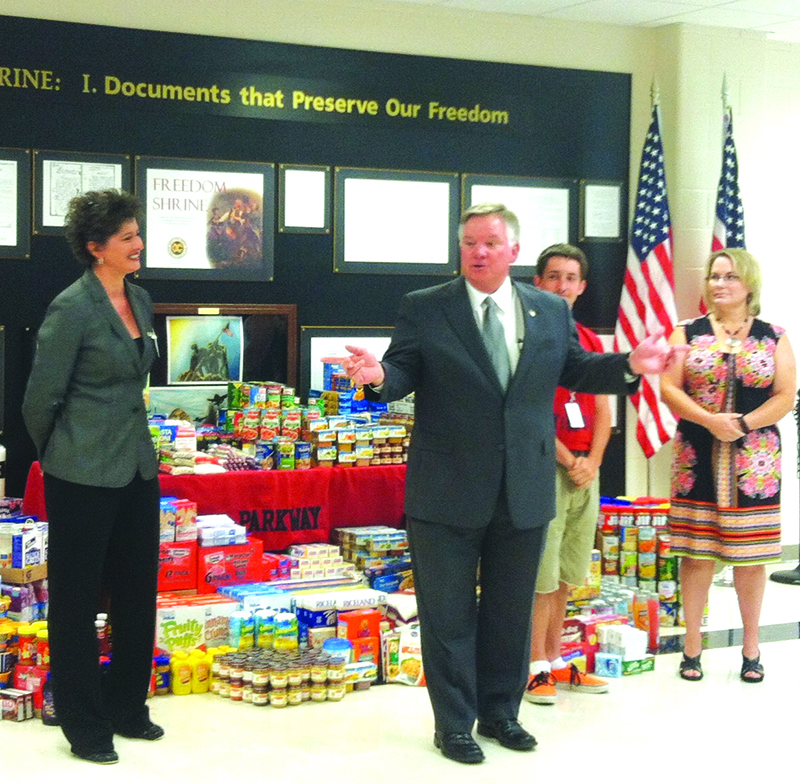 With the 2013 school year starting up, the Bossier School District is already making their mark on the community.

This year, the entire school district of Bossier Parish will be participating in service projects where each school will be “Paying it Forward” for those in need throughout the Bossier area via their “Helping Hearts One Week at a Time” initiative.

“The service projects are exclusive just to Bossier School District,” said Sonja Bailes, Public Relations Liaison for Bossier Parish School Board. “Last year, Rachel’s Challenge was honored by a certain number of schools. This year involves every school, department and center in Bossier Parish. We’re looking at making it a thousand people strong when you factor in all of our students and employees, encompassing all of our schools.”

Kicking off the service initiative is Parkway High School, whose service project will benefit the Barksdale Air Force Base and its Airman’s Attic.

“This year every school cite is taking a week out of the school year and going where their heart leads them. Being so close to Barksdale Air Force Base, and a third of the students having some military affiliation, Parkway chose to honor the military for their first yearly service project.”

Parkway started last Saturday, participating in events that involved the Barksdale Air Force Base and the Airman’s Attic. These events included going to the Global Strike Air Museum to clean planes, doing FOD (Foreign Objects of Debris) Walk, distributing thank you cards to retirees, Base Exchange and at pharmacies. The children of Parkway High School also cleaned the youth center, fitness center, chapel and did general housekeeping alongside doing a food drive for the Airman’s Attic, all in attempts to “Pay it Forward” to the community.

For their final service project, Parkway made a presentation on Friday, August 16, which was a culmination of their week-long effort that began last Saturday to honor our military and thank them for all they do.

“The food drive presentation was Parkway’s grand finale, if you will,” Bailes said. “Every home room was assigned a particular number of items to bring. The haul was a representative of the entire student body. I knew Parkway was going to knock it out of the park. They always exceed expectations, it’s one of their qualities, so I knew they would impress. They went beyond. They didn’t have to do as many projects as they did, but they chose to do the Airman’s Attic, cleaning all those facilities, washing the planes, sending out thank you notes, and collecting food. There are so many different things that they did this week. I think they truly made a big impact”

As mentioned, each school will pick a project this year each week to honor some facet of the community. Parkway chose to honor our military for their week. Next week Haughton Middle School will be paying it forward to the Salvation Army by doing a toiletry drive, collecting money, and will have a van parked for the Salvation Army collecting donations. Other schools this year will be honoring Down Syndrome for their service project, Puppy Rescue in honor of a past educator, Treats for Troops, and a number of different examples throughout the year.

“I’m really excited about the scope of projects that we have planned for this entire school year,” Bailes said. “We really hope that people will see that Bossier schools have made a difference and appreciate the schools giving back to the community because it’s our way of saying thank you to the community.”

By involving students in the service project initiative, they are learning core values that will benefit them not only in the classroom, but out in the real world as well.

“We hope students will recognize that they’re leaders,” Bailes said. “We all want to make a difference. What a powerful difference they were able to make this past week, and hopefully it won’t stop there. We hope the students at Parkway will continue to help others in need, whether it be Barksdale Air Force Base, someone in their own school, or another organization, whatever the need is where their heart leads. Character education isn’t something you can teach in a classroom. You can teach reading, writing, and math, but to develop a character, that is something that you have to learn outside, by actions and doing. Some kids never have that opportunity so our Superintendent feels that it’s important to look beyond our studies and reach out to help others. And what a great example of building character this has been so far.”

The Bossier School District hopes that by having this year long service initiative, it will not only impact the School District, but the community as a whole.

“I hope the community sees that they can make a difference as well,” Bailes said. “Every one of us has the power to make a difference, the ability to reach a common goal and pay it forward. We hope that we will always have some element of community service in Bossier schools. Right now we’re just getting this one started, but I can almost guarantee you that something like this will continue.”