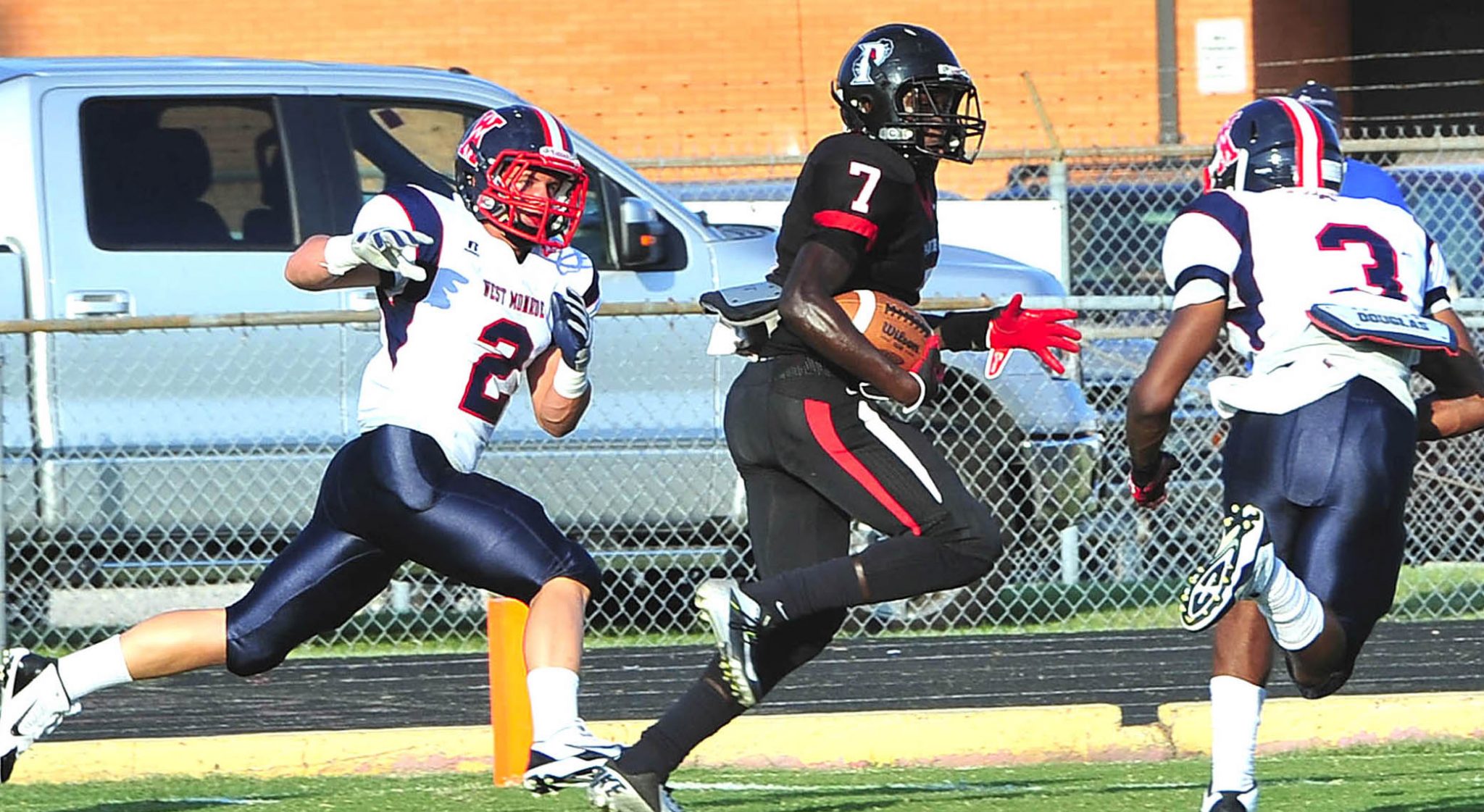 Louisiana New Tech at Plain Dealing coach Coy Brotherton also liked some of the things his team did, but he also saw a lot of room for improvement.

The best thing about the scrimmage, Guin said, is his team suffered no injuries.

Feaster said a junior varsity lineman suffered an injury that will have to be evaluated further, but other than that the Panthers came out unscathed.

The Panthers more than held their own against the Rebels, who have won eight state titles since 1993 with the last one coming in 2011.

“We scrapped,” Feaster said. “I thought we gave it a great effort. But there were a lot of things that were too hard that should have been easier than they were.

“I’m certainly not complaining when we play a team like West Monroe and we play them pretty close. I’d like our program to be at a point where we could match up with them physically and all that. We’re still working toward that end.”

West Monroe scored touchdowns on its first two possessions of the controlled scrimmage. Parkway scored one in the first go-round. The Panthers also reached the West Monroe 1 but a penalty pushed them back and they missed a short field goal.

In the first set of plays each team started at the opponents’ 40 because the schools’ freshmen teams were scrimmaging on the other half of the field.

In the second set of plays, each team started at its 30.

After being dominated by West Monroe’s big offensive line in the first go-round, Parkway’s defense played much better, holding the Rebels out of the end zone in the second.

Avery Shoebridge kicked a 28-yard field goal on the the Panthers’ final play. Hunter Huckaby had an interception.

The scrimmage concluded with a regulation 12-minute quarter that ended in a 7-7 tie.

West Monroe’s defensive front put a lot of pressure on Harris, who did almost as much damage with his feet as he did with his arm. Several times Harris tucked the ball and ran for first downs.

He also threw two touchdown passes. The first was a 40-yarder to Louisiana Tech commitment Brodrick Jefferson on the Panther’ final play of the first go-round.

Jefferson did a good job of coming back for the ball and breaking a tackle around the 7-yard line.

Harris’ second TD pass went for 23 yards to William McKnight. He perfectly timed the pass over the middle, taking advantage of the Rebels’ rush.

Feaster took a lot at lot of the players. McKnight, a junior, saw a lot of action in the backfield as did sophomore Keiuntre Normandin.

“Now we go look at the film and evaluate our players one at a time and see who held up against West Monroe,” he said. “They’re a great front and they’re a very physical team. Certainly they were more physical than us tonight. But we have to evaluate our guys and see who can play because we have 35 seniors. We have a lot of guys out here and we have to try to find the best ones to get on the field by the time we get to Calvary.”

One of the most impressive players in the scrimmage was second-team quarterback Keondre Wudtee, a 6-foot-4 sophomore. Wudtee tossed three touchdown passes, including two to 6-foot-5 Artavious Lynn and one to Ryan Huddleston.

Haughton-North DeSoto: Guin was pleased with the play of his young defense and new quarterback Will Haines.

“We did good,” Guin said. “We played real well on both sides of the ball really.”

The format of Haughton’s scrimmage was similar to Parkway’s.

North DeSoto’s No. 1 offense scored once on about a 60-yard run, he said.

“We’re young on defense and they played pretty good today, so that made me feel pretty good,” Guin said.

Louisiana New Tech at Plain Dealing-Fair Park: While the Lions didn’t suffer any serious injuries, some players went down with cramps on the warm night.

The Lions’ first-team offense didn’t score but it came close a couple of times, Brotherton said.

Fair Park, coached by former Airline coach Mike Greene, scored a couple of touchdowns, including a 15-play, 80-yard drive in the regulation quarter that concluded the scrimmage.

“Logan looked good,” he said. “He made some good decisions with the football.”

The scrimmage will help the Lions as they get ready for next week’s jamboree.

“It lets the kids know about game situations,” Brotherton said. “Some of them are playing that are starters for the first time — just get them used to the game speed and what it’s like to play a football game.”